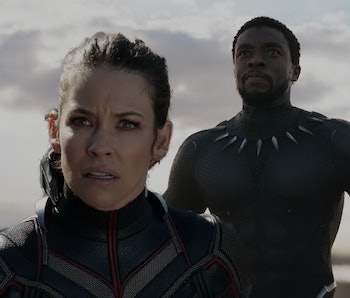 There’s a disturbance in the fandom. Today, Marvel fans woke up to two major things: Glowing reviews for the timely, progressive, and long-awaited Black Panther, and the trailer for the fun but fairly standard-issue Ant-Man and the Wasp, a sequel to 2015’s understated heist comedy Ant-Man.

For a large portion of Marvel fans, mainly those on Twitter, it feels weird Marvel wants fans to care about the Ant-Man sequel while the “cultural phenomenon” that is Black Panther is poised to change everything.

Fortunately, enjoying these two aren’t mutually exclusive — you can like both! Unfortunately, it’s sort of Marvel’s fault fans feel this way. Marvel not only chose an awkward time to sell a movie set for July (it is still January!), it also left out one of the most progressive things in Ant-Man and the Wasp, making the movie look very white in the face of Black Panther.

For most of the trailer, Ant-Man and the Wasp makes an appropriately big deal out of Hope Van Dyne (Evangeline Lily) as the Wasp. The film acknowledges her absence in Captain America: Civil War, and that maybe it shouldn’t have let three years pass before Hope became a superhero. It was a sore spot Marvel let the mantle of one of its first female superheroes unfulfilled, and Ant-Man and the Wasp is clearly course correcting, making sure “and the Wasp” means something. And there’s no question Lily is going to be a bonafide star in the movie.

But the trailer also left out one of its other progressive characters: Jimmy Woo, played by Randall Park (“Asian Jim” in The Office). A stylish Asian-American FBI agent, Woo predates most Marvel heroes, debuting in 1956 when racism against Asians and Asian-Americans were commonplace. Jimmy Woo wasn’t a kung-fu master or ninja, but an American patriot who battled the Communist super-villain, Yellow Claw. It’s cool Jimmy Woo will join the MCU in Ant-Man and the Wasp. But he’s missing in the trailer, which makes the film look lacking in color, in more ways than one.

Speculatively, it’s possible Marvel released the trailer now to avoid losing it underneath the incoming avalanche of Super Bowl coverage. But again, waiting a few more weeks — say, after the release of Black Panther — would have been just as fine, and would have been without the hint of tone-deafness when everyone wants to gush over Black Panther instead.

The timing is off, to be sure. It seems backward Marvel wants to sell more Scott Lang when the man of the hour is T’Challa. But there’s room for both in the Marvel Universe. One movie can change minds about race and identity, and the other can throw giant Hello Kitty Pez dispensers. No one says you can’t have both.

Marvel’s Black Panther will be released on February 16. Ant-Man and the Wasp will hit theaters on July 6.