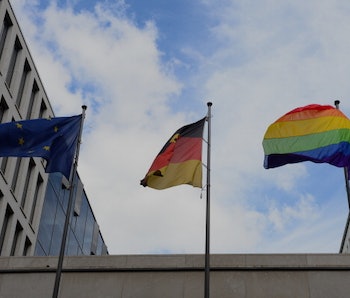 Germany’s most prominent history museum, The Deutsche Historisches in Berlin, is showcasing 150 years of the country’s homosexual history for Pride Week. Among the featured items is a letter written in 1868 that is believed to be the first written use of the words “homosexual” and “heterosexual.” And it’s kind of sweet.

Karl Maria-Kantberry, a human rights campaigner, wrote the letter to German law student Karl Heinrich Ulrichs. Ulrichs, who was gay himself, wrote a study in 1864 entitled, “Researches On The Riddle Of Male-Male Love.” In 1867, he appeared before the Congress of German Jurists in Munich, campaigning for the de-criminalization of sodomy.

Here is an excerpt from the letter, in which he is discussing heterosexuals:

Germany, like every other country in the world, has a turbulent history with its gay citizens, but Germany’s current political climate is primed for a conversation. Civil partnerships have been legal there since 2001, but full-fledged marriage is not. Cultural Minister Monika Grutters has stated this showcase contextualizes the current debate and shows how “hard fought” progress can be.

The exhibition, entitled “Homosexuality_lies,” will run from Friday June 26 through December 1st.