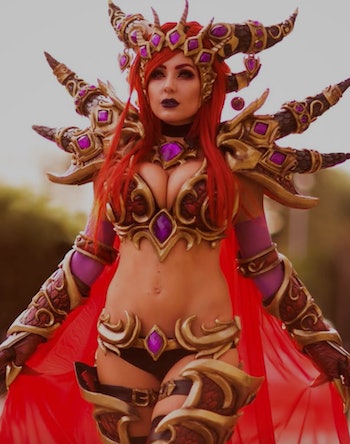 Jessica Nigri makes a living by being a fan. She isn’t the first to do so, but even in 2018 very few people who love anime, video games, and sci-fi can say the same. With over 8 million followers across social media, the 28-year-old from New Zealand (now living in Arizona) is one of the most prominent faces of cosplay, a portmanteau of “costume play,” in which fans dress in homemade outfits based on fictional characters.

“I’ve never met more die hard fans than cosplayers,” Nigri tells Inverse in a phone interview. “Think about the skills they acquire to represent this thing they love: Makeup, woodwork, armor builds, all because they like something a lot. It’s incredible when they’re driven by passion.”

A self-taught costume maker, Nigri’s career is built on a constant internet presence, but a new documentary is the first time she’s opening her doors. Becoming Jessica Nigri, directed by Mat Hames that premiered Friday on Rooster Teeth’s digital platform FIRST, gives fans and curious parties an intimate, sometimes difficult look at the highs and lows of being a cosplayer through the perspective of arguably its biggest homegrown personality.

Set on the road to BlizzCon 2017, a massive gaming convention (attendance: 35,000) cosplayers consider an annual red carpet for their outfits, Becoming Jessica Nigri follows its subject struggling — and ultimately, failing — to complete her dream costume, opting for an alternative. With a massive change in plans and only a week left, viewers witness the caffeine, the sleep deprivation, and self-doubt that so often fuel fervent hobbyists to reach the finish line.

In 2009, Nigri skyrocketed to internet fame when she went to San Diego Comic-Con as “Sexy Pikachu.” Photos went viral in the nascent days of the mainstream succumbing to the revenge of the nerds, and Nigri’s sultry tongue-in-cheek take on the anime mouse was a prologue to what would be her signature. In 2012, Nigri won an IGN contest to become the official cosplayer for the pulp video game Lollipop Chainsaw. That only led to more sponsored gigs, for games like 2013’s Assassin’s Creed IV: Black Flag and 2014’s Yaiba: Ninja Gaiden Z. A stint as a freelance online personality followed, along with a recurring role on the popular animated web series RWBY.

Nigri’s celebrity is a rarity in cosplay. For most enthusiasts, cosplay isn’t a stepping stone into Hollywood; cosplay is the thing. “For a lot of people in the community, it’s more of a personal endeavor, to push yourself,” she says. As proven by her contemporaries, like Yaya Han and Linda Le, one could become famous (read: make a living) solely through cosplay. Nigri knows there is a life for her after cosplay, but she’s never leaving it either.

“I definitely know there is something after cosplay, but [mine] will still involve cosplay,” she says. Though Nigri may one day stop attending conventions in her own wares, she’s eager to mentor and train the next generation. “I love the newer community coming in. They have fresh ideas a lot of people who have been in cosplay for a long time get jaded to. My heart is nestled here. I want to branch out, but I really do love the community.”

Now at the center of a documentary, Nigri opens up to Inverse about the realities of internet fame, female agency in cosplay, and why all those sleepless nights make the hobby worth it.

For most of the film, we see you sacrifice so much time, energy, and even health to make one outfit. Why was it so important to go to BlizzCon in a new costume?

I look at BlizzCon as a challenge I can push myself to do. We went on our own accord, we wanted to go for fun. Everyone in the community wants to make new, bigger things for themselves, and people bring their A-game there. It’s cool to debut something you poured your heart and soul into that people enjoy, and hopefully, get the attention of sempai, [game studio] Blizzard. We’re there because we love Blizzard games. That’s the drive of cosplay. We love Blizzard and we want to show them that fandom.

That’s 100 percent correct, If you compare yourself to others you’re gonna be really unhappy. Pushing yourself internally and knowing what you can do and what you want to do really helps you.

There are revealing moments in the documentary, like when you’re on the ukulele singing “Cosplay sucks, it’s ruining my life.” Are there times when you really think the effort isn’t worth it? Is “I’m not going to do it” an option?

Yes. I like to look at cosplay almost like a cruel mistress. You want to dedicate your life, but sometime she slaps you in the face because you’re not good enough in your mind. Yeah it sucks to go through, but the reward is so much more than any pain.

“I love the newer community coming in. They have fresh ideas a lot of people who have been in cosplay for a long time get jaded to. My heart is nestled here.”

How much did your life change after Sexy Pikachu? Not just in terms of having fans, but the possibility of making a living?

When that started I had no idea how to handle it. I didn’t think of it as a work opportunity, it was and still is making fan art. It didn’t dawn on me until Lollipop Chainsaw when I was like, “If I wanna keep doing this, I can make money and do more.” It came from that, not “I wanna make money.”

Your work comes from putting yourself on the internet, and being a cosplayer means transforming into others. How do you keep a version of Jessica Nigri that’s only for you?

There’s that inner layer that is just for my family, but even then that’s just me. I’ll have a conversation with my mom and dad the same way with you. I’m a cosplayer and I’m supposed to be someone else. But who I am is what you get.

A lot of people find themselves in cosplay because the characters that we cosplay typically are characters that have strong traits that may translate. There is an insane amount of confidence that comes from putting on a costume and going to a con and getting your picture taken. People that love anime and games, I don’t want to say are anti-social, but it can be difficult. I want people to know that it’s so much easier and fun if you find the right people and go hard with that.

What can you say about female agency and sexy cosplay? You have critics and memes that brand you just with sexy costumes.

I’ve always felt dressing sexy has been empowering. I think women should do what they want with their bodies and its not fair to judge a woman for that. There’s a lot of double standards. I’m constantly going through my own feelings every day, but women should feel strong and confident and do what they want.

You say in the documentary that with each cosplay, you adopt parts of those characters into yourself. What person would you say Jessica Nigri is now?

I feel like a weird character select version of myself: Always customizable. I still have so much growing to do and characters I want to adopt. I think characters guide us.