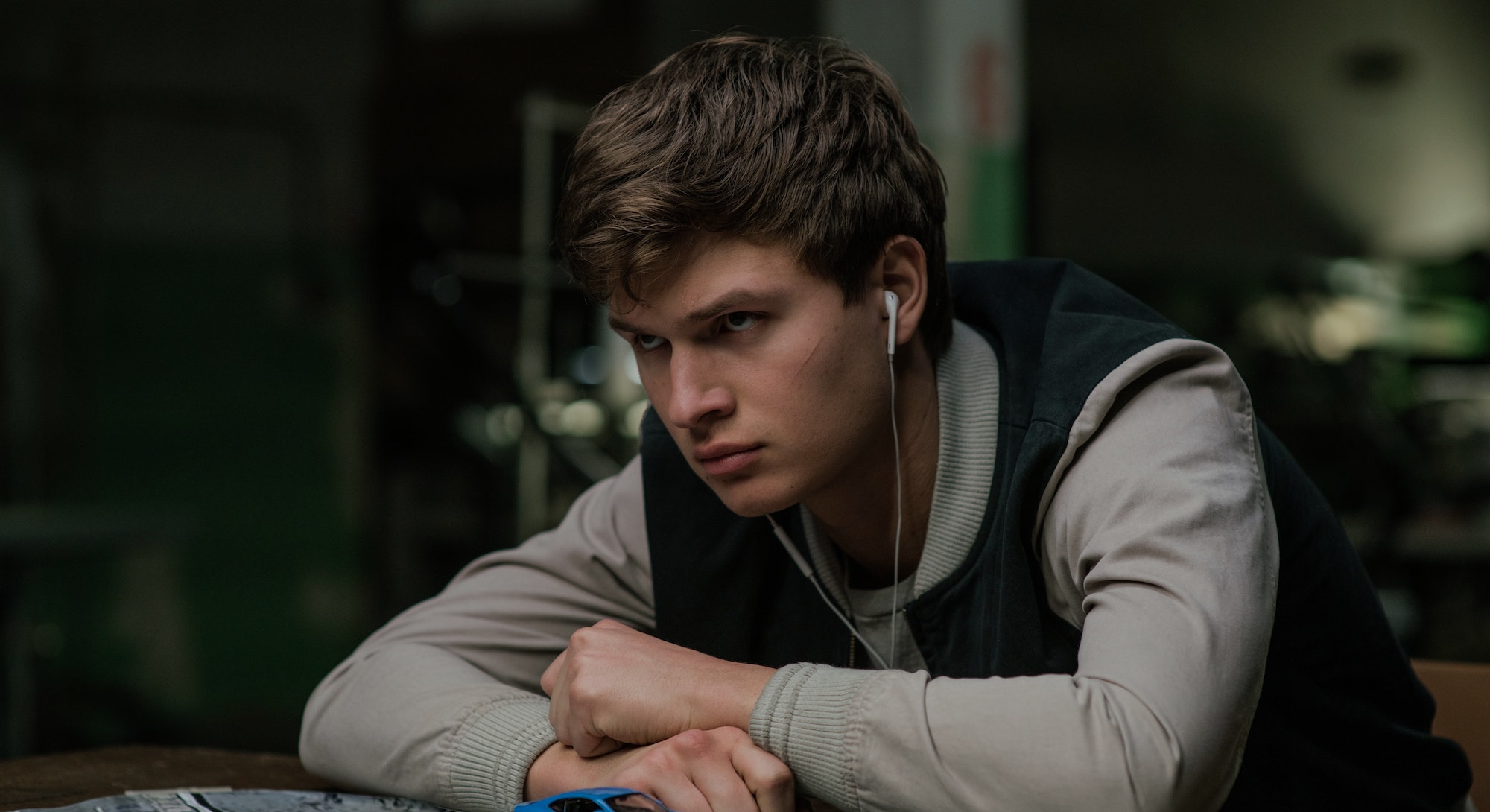 Watching a movie on a laptop — or worse, a phone — with headphones is not an optimal way to experience a movie. But one person doing just that stumbled upon a fairly remarkable editor’s detail within the sounds of Edgar Wright’s Baby Driver, the summer hit about a teenaged getaway driver named Baby, played by Ansel Elgort. To appreciate the sounds of Baby Driver, you must listen closely. Literally.

“I watched Baby Driver with headphones, and when Jon Bernthal pulls the earbud out of Baby’s left ear, the music Baby is listening to stopped playing in my left earbud, but continued in my right ear,” the anonymous Redditor explained in a post that received 25.4k upvotes. “Then, right when Baby puts the earbud back in, the music returns to the left earbud. This happens throughout the movie when he takes an earbud out.”

It’s more than a gimmick made up in the editing bay. The sound editor, Julian Slater, describes the movie as a sonic “playground for adventure.”

Last summer’s action movie mixtape Baby Driver made music of its protagonist’s medical condition — tinnitus, a form of hearing loss commonly known as a constant “ringing” in the ears — to create an experience that just should reinvent how sound is designed in film. Individuals with tinnitus and professionals who study it have praised Baby Driver for its accuracy to the condition and its respect to disabled representation. The car chases are cool, too.

Slater says his interest in sound began with a Sony Walkman his parents bought him; he was fond of The Police’s “Every Little Thing She Does Magic.” He also was taken by Ben Burt’s work in Star Wars, and studied sound engineering before becoming one of Wright’s most frequent collaborators: Shaun of the Dead, Hot Fuzz, Scott Pilgrim vs. The World were all sonically designed under Slater’s supervision. He also did the sounds for the 2017’s Jumanji: Welcome to the Jungle, and 2015’s Mad Max: Fury Road — though he says he was a much “smaller cog in the machine” under director George Miller.

With Baby Driver, Slater was behind the wheel. He learned about living with tinnitus from individuals who have the disability, all of them ranging in severity. “I wanted to speak to people who got it and explaining what that sound means to them,” Slater tells Inverse. “It’s a big part of the story. It’s why Baby listens to music.”

Wright lived with tinnitus when he was a child, an experience that gave him the idea for the movie. “I used to have tinnitus around the age of 7 or 8,” he said in a Reddit AMA to promote the film. “It was reading Oliver Sacks book Musicophilia that made me think that this would be a condition that Baby suffers from and encourages him to listen to music 24/7.”

According to the American Tinnitus Association, approximately 15 percent of the world’s population, including 50 million Americans, suffer from tinnitus. It’s caused by prolonged exposure to loud noises, which means construction workers, soldiers, and rock stars are all susceptible. It can also result from head injuries. That’s how Baby, played by Ansel Elgort, got it in the car accident that made him an orphan. To drown out his tinnitus, he relies on an arsenal of stolen iPods loaded with hits from Queen (“Brighton Rock,” which has a minor plot point in the film), Bob & Earl, The Commodores (“Easy”), Simon & Garfunkel (“Baby Driver,” of course), and more. But when audiences don’t hear Freddie Mercury’s arena rock, Baby Driver has them hearing Baby’s disability.

“The tinnitus happens when Baby is not listening to music,” Slater explains. The ringing also increases in volume “the more stressed Baby gets,” which Slater learned from people living with tinnitus. “It’s what happens. It changes depending on how you are feeling.”

That is scientifically accurate, according to two experts: Dr. Fatima Husain, a neuroscience professor at the University of Illinois at Urbana-Champagne with 17 articles on tinnitus on Pub Med, and Lindsey Banks, Au.D, a private practice audiologist who operates the educational portal Everyday Hearing. Banks loved Baby Driver and was “impressed” how it portrayed tinnitus. Dr. Husain hasn’t seen it yet, but a student has promised to lend her a DVD. But both agree on Slater’s approach to designing the sounds of Baby Driver.

“The more stressed that person is experiencing, the tinnitus will become louder or more frequent,” Banks tells Inverse. Dr. Husain describes it as a “feedback loop”: When Baby’s stressed, the tinnitus gets worse, and when it gets worse, Baby gets stressed. So it’s really important Baby has his iPod for all those car chases and gun fights that happen over the course of the film.

“If you’re going through stress and sleep deprivation, you perceive it to be louder,” Dr. Husain says. “The louder it sounds, the worse you feel.”

Constant ringing is really be abrasive for movie-goers, something the filmmakers quickly realized — “You run the risk of pushing the audience away,” Slater says. — so they altered the pitch of Baby’s ringing. “Sometimes it’s high-pitched. It’s always in the same key [to the music] he’s just listened to, or about to listen to,” Slater explains.

Moviegoers with tinnitus noticed. On the Reddit forum r/tinnitus, they praised Baby Driver for the accuracy, at the same time expressing discomfort with the gun blasts and tire screechings.

“It should really be mentioned … that these high-pitched sounds are there to show the tinnitus of the main character. They’re also mixed in a way that, in my opinion, accurately reflects the level of T tones,” commented Goombay_Smash. Another user, Warbek_, responded: “I didn’t even notice in the post office scene, since the tone was so similar to that of my own tinnitus.”

The goal for implementing a sound for tinnitus “was to hear the environment like Baby does.” “When he’s not listening to music, you hear tinnitus. When he listens to music, it envelops you.”

Slater and his team mixed the film’s acclaimed playlist of music — often heard through Baby’s headphones — in Dolby Atmos, which mixes sound across 128 discrete tracks. “We had speakers in the ceiling. It’s like a sound design orchestral tour de force. There’s a lot happening.”

The tinnitus ringing is just one part of an array of sounds in Baby Driver. Even sounds like car horns, alarms, bells, and footsteps, were given rhythm. It’s most apparent in two distinct set-pieces: Baby’s “Coffee Run” in the opening credits, and the “Tequila” shootout midway through the film. Slater says this is because Baby is always listening to music to drown out his tinnitus. So they made his world musical.

Tinnitus experts are hoping more Hollywood movies can portray the disability with the same care as Baby Driver. Though Wright made it a superpower, Banks thinks representation can help erase the stigma that plagues hearing loss. It may even finally encourage young people to seek help, as tinnitus is mistakenly perceived as exclusively an elderly condition.

“People that have severe tinnitus, they feel lonely,” Banks says. “The feel they’re the only ones that understand it. Making tinnitus out and to the forefront might give people a little more empathy towards what they’re going through.”

“I actually thought it was cool how they worked tinnitus into his character. It was nice being able to relate to that.”

Erasing the stigma can also help young people get the treatment they need before it’s too late. “Portraying hearing loss as not something that just comes with age, that’s important. People are delaying treatments because they don’t want to be ‘old.’ It’s important to get that out there, that everyone at different ages have hearing loss.”

Said a user on Reddit: “I actually thought it was cool how they worked tinnitus into his character. It was nice being able to relate to that.”

Baby Driver, nominated for Best Sound Editing with Julian Slater’s name, is the first time that he feels like a contender after being a cog in Mad Max, which took home the Oscar for sound editing. “The truth is, when I did this movie, me and my crew definitely had a feeling we were working on something special. It was once-in-a-career. We felt we were doing stuff never done before. But if someone said you would be having a conversation about a nomination, I would have been in disbelief. I’m really proud. I’m a big believer in the movie, let alone my work.”

But the real achievement, Slater says: “I’m glad the movie resonated with people.”