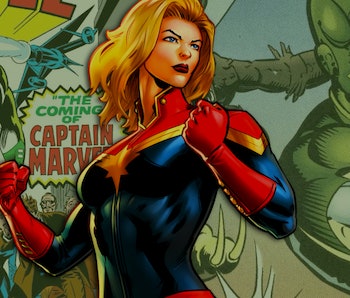 Captain Marvel is coming to the Marvel Cinematic Universe, but she’s going to look a little different than the comics. New behind-the-scenes photos of Brie Larson in her Marvel hero’s costume have surfaced online, revealing a very MCU-type outfit with a surprising green color scheme, a change from the usual red, blue, and gold worn by Carol Danvers.

On Thursday, photos of Larson dressed as Captain Marvel while shooting on location in Atlanta finally hit the web. Typical of many costumes in the MCU, the outfit looks hi-tech but practical, with lots of armored padding and linear lines. It bears a strong resemblance to Paul Rudd’s Ant-Man outfit, with hints of Chris Evans’s Captain America and Scarlett Johansson’s Black Widow.

But the biggest thing about the costume is the color: It’s green. This is a bit surprising, as most modern incarnations of Captain Marvel have a color scheme of red, blue, and gold/yellow.

However, as some fans on Twitter have pointed out, Mar-Vell, the first Captain Marvel, was a Kree soldier whose Kree costume was green. It was only after arriving on Earth to study humans for the Kree empire did Mar-Vell change his costume, after obtaining “Nega-Bands” that give him real superpowers. It was then that Mar-Vell got a new red and black costume that laid the groundwork for Carol Danvers’s suit.

Just as plausible, some fans on Twitter speculate the costume allows for major color correction in post-production; the green is a template for the editors to turn it into any color. In fact, you don’t have to work hard to imagine it, as some photoshops have already popped up on social media.

Like Mar-Vell, it’s possible that Carol Danvers will start out with a green Kree costume and change into her signature red and blue, all without the need for a literal new costume.