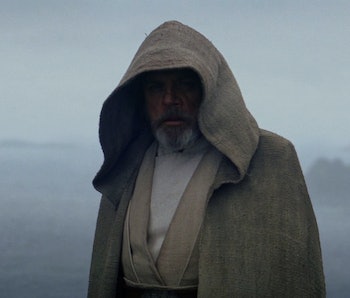 It’s a brave new world in this galaxy far away, as a large number of Star Wars fans feel invested in the (potential) romance between Kylo Ren and Rey, nicknamed “Reylo.” A month after the release of Star Wars: The Last Jedi in theaters, Mark Hamill is having fun with “Reylo” fans on Twitter, playing the role of the out-of-touch old man who secretly already knows everything.

On Wednesday, a fan on Twitter tagged Mark Hamill (@HamillHimself) in a tweet asking him to “like” it if he supports Reylo. Hamill instead replied: “What is Reylo?” As of this writing, the tweet has 2,271 retweets and 7,382 likes. Never let it be said that “Reylo” fans aren’t passionate.

Even funnier than Hamill’s tweet, however, was another fan who responded: “You blew up a hut trying to stop it.” True! And maybe Hamill knew more than he let on, tweeting later: “Did I really not know what Reylo is… or did I just want everyone to send me countless pictures of Adam Driver with his shirt off? #YouDecide”

Fans have been shipping — the fan-driven act of romantically pairing fictional characters who share chemistry, even if canon doesn’t — Kylo Ren and Rey since their debut in 2015’s The Force Awakens. But initially, the pairing was antagonistic, until this year’s The Last Jedi has Kylo and Rey put aside their differences and connect with each other through the Force. Adding to the potential romance is a sexual energy in The Last Jedi that has never been present in any previous Star Wars movie before.

In an essay on Vanity Fair, Joanna Robinson wrote of the “sexual innuendo” in The Last Jedi, specifically in the Rey/Kylo plot. “Kylo’s gleaming bare chest aside, you can go ahead and consult your friendly neighborhood Freudian to analyze the imagery of swinging lightsabers, the rivulets of water on Kylo’s black leather-gloved fist, or the dark, seaweed-slick cavern Rey finds herself irresistibly drawn into as she tries to grapple with the powerful thing that was woken inside her,” she said.

Robinson adds that the reading is restricted to subtext, given the overwhelmingly family-friendly appeal of Star Wars. It’s also worth pointing out how potentially unhealthy the theoretical relationship may be. Critics of “Reylo” have noted that Kylo’s penchant for violence and his emotional put-downs of Rey — “desperately telling her she’s nothing and nobody ‘but not to me’,” writes Robinson — means Kylo is as a model romantic partner as Christian Grey.

Until Kylo Ren gets his act together, maybe it’s a good thing Luke Skywalker doesn’t want these two kids from Force-smooching.

Star Wars: The Last Jedi is in theaters now.