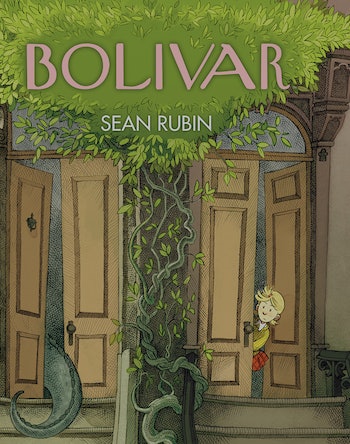 In November 2017, comics publisher BOOM! Studios under its Archaia imprint released Bolivar, from writer/illustrator Sean Rubin, one of the most remarkable all-ages graphic novels of the year. Contrary to its title, Bolivar isn’t about the 19th-century military leader who ascended to four South American presidencies. Rather, it’s about a dinosaur who lives in New York. And no one notices Bolivar, the dinosaur who lives in New York, because New Yorkers don’t notice anything. It’s this bit of social satire that gives Bolivar both heart and edge over other children’s stories that have found momentum into theaters.

The theatrical version of Bolivar, announced in 2012 when the comic was just a manuscript with two illustrations, is on hold. But if the final product is any indication, Bolivar is more than capable of competing as an awards contender.

Set in modern New York City, population 8.5 million, Bolivar follows a little girl, Sybil, who notices that her next door neighbor is a 15,000-pound tyrannosaurus rex named Bolivar. Despite Sybil’s efforts for other people to see, and to get proof, that Bolivar roams the Earth, Sybil is dismissed by classmates and adults alike. When Sybil finally meets Bolivar, even this urban-dwelling, book reading, vinyl-collecting t-rex keeps his distance.

“You’re a dinosaur!” Sybil says to Bolivar when they finally meet. “You shouldn’t talk to strangers,” he tells her. Mishaps follow, and Bolivar finds himself interim Mayor of New York.

A children’s book by way of a Sunday newspaper comic — Rubin cites Peanuts and Calvin & Hobbes as influences more than Stan Lee and Jack Kirby — Bolivar’s light social commentary spoofs the (admittedly accurate) idea that east coast city dwellers are too busy to notice the extraordinary in front of them. “It’s knowing not to look. Adults are taught not to look,” Rubin explains. “Part of conforming is knowing everyone else is conforming too. It’s rude to point out something unusual. You’re not supposed to call attention. We train children to do this. ‘Don’t look, sweetie.’ Sometimes it’s warranted, other times, it’s silly because there could be something extraordinary and we teach kids to look away.”

It took having kids of his own to finally grasp the idea, too. Bolivar had been in Rubin’s head since he and his cousin played with a gray toy dinosaur they named Bolivar (“To this day I do not know why, it just stuck”), and imagined an adventure where Bolivar became Mayor of New York. As an adult, Rubin knew that kernel could make a great book. “I started realizing as I’m writing that it didn’t seem likely, if this happened, anyone would react to it.” Knowing how New Yorkers are, “The Mayor of New York could be a dinosaur before anyone caught on.”

Rubin made literature’s hidden gem of 2017 over a five-year period, when Rubin went from a single guy in his twenties to a married father of two. After raising them and reading to them for several years, Rubin suddenly figured out how bedtime stories actually work. “I became aware how things were paced, how long they were, what humor was in them,” he tells Inverse.

Born in Brooklyn and schooled at Princeton, Rubin’s Bolivar satirizes coastal city folks with affection, because Rubin was one of them too. The hybrid children’s book/comic is packed with autobiographical details known only to the author — his own adventures roaming the city’s museums and other favorite spots that are still around. Nerd staple Midtown Comics has a cameo. “I have at one point accrued so many buy-back points at Midtown, I didn’t put out my wallet for months,” remembers the author.

At one point, Bolivar picks up a copy of The New Yorker — “proxy for urban sophisticate,” says Rubin — on his daily route. It’s one joke that, somehow, also defines Bolivar. “Maybe ask David Remnick, but there are things like that that work. They have a sound or weight you can use and kids understand that’s an ‘adult’ thing.” The author cites ‘90s Warner Bros. cartoons like Animaniacs, which parodied politics and celebrities before Twitter, that were still hits with kids. “Kids pick up on things like that on some level you don’t have to worry about.”

Today, Rubin lives with his family in Charlottesville, Virginia, 400 miles away from the hustle and bustle of Manhattan. But maybe one day, New York will again be close to Rubin if Bolivar hits theaters.

“It was an interesting experience,” Rubin says about the book’s film option and subsequent announcement. “I got a lot of congratulatory emails. If you’re in this industry it’s very easy to feel like, if you’re doing a book someone wants to make a movie, that’s an end goal. It’s not.”

To Rubin, it was more important “to get the book out and make the book good” than worry about the film while writing. “Of course we’d love to see a movie of Bolivar. We consider the project in development. It’s still on the table and we talk about it a lot. If the opportunity arises to make a great movie, we’ll take it.”