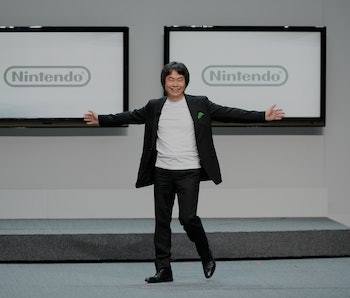 The Wii U has some solid games and nifty features, but hardly anyone has bought it. NPR interviewed Nintendo’s favorite son, Shigeru Miyamoto, on the rough state of Nintendo’s current console offering. He had this much to say:

[I]f the system is appealing enough, people will buy it even if the price is a little bit high. I think with Wii U, our challenge was that perhaps people didn’t understand the system.

I think unfortunately what ended up happening was that tablets themselves appeared in the marketplace and evolved very, very rapidly, and unfortunately the Wii system launched at a time where the uniqueness of those features were perhaps not as strong as they were when we had first begun developing them. So what I think is unique about Nintendo is we’re constantly trying to do unique and different things. Sometimes they work, and sometimes they’re not as big of a hit as we would like to hope. After Wii U, we’re hoping that next time it will be a very big hit.

He’s right: People didn’t understand the system. Even during its announcement at E3 2011, people weren’t sure what to make of it. It was a new console, but Nintendo was almost acting like it was a peripheral upgrade of some type. The confusion muddied what would have been hot buzz going into its launch in the following year.

Certainly now, consumers are continued to be confused by the Wii U, and it’s been on the market for almost three years now, in that time selling about 10 million consoles, a mark that Sony hit in a mere nine months with the PlayStation 4. It’s survived with neat games like Super Smash Bros. and Splatoon” but it’s still reaching to get on the level of PS4 and to a lesser extent, Xbox One.

Does this mean they’ve given up hope on the Wii U? Based on Miyamoto’s words, it sounds like Nintendo is riding out the Wii U until they’re ready to show off their next big console, whenever that may be.

Also, one of gaming’s new frontiers is virtual reality, and we’ve touched how Nintendo is avoiding that. The creator of Super Mario Bros. was a bit softer with his words in regards to Nintendo’s hesitance to embrace VR gaming.

We’re quite interested in it, but at the same time, Nintendo’s philosophy is that we create products that are going to be played with everyone in the living room. And we don’t feel that virtual reality is a good fit for that philosophy.

The Wii U is still in the fight, however bruised its ugly mug might be. Splatoon is a new favorite, but they still need to do more to get out of their rut.