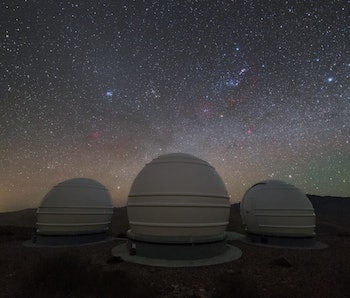 The European Southern Observatory’s (ESO) La Silla Observatory in northern Chile is already home to some of the world’s most cutting-edge telescopes, but their telescopic arsenal just got even more impressive.

On Tuesday, the ESO announced that the shiny, new Exoplanets in Transits and their Atmospheres (ExTrA) telescopes have made their first successful observations. The goal of the three ExTrA telescopes pictured below is to hunt down planets that are orbiting nearby red dwarf stars — small and relatively cool stars that make up a large portion of the stars close to Earth.

This is project was funded by the European Research Council and the French National Agency for Research. The telescopes were first written about in a SPIE research paper back 2015 and has since been scanning the skies for Earth-like planets.

“With ExTrA, we can also address some fundamental questions about planets in our galaxy,” said Jose Manuel Almenara, a member of the ExTrA team, says in a statement. “We hope to explore how common these planets are, the behavior of multi-planet systems, and the sorts of environments that lead to their formation.”

ExTrA studies and detects exoplanets using 0.6-meter telescopes by tracking the levels of light received from the red dwarfs it’s focused on, in a process known as transit photometry.

The idea is when an exoplanet that is orbiting one of these stars passes in front of it, the light ExTrA picks up becomes dimmer. Monitoring how often and how much a star dims during this process tells astronomers how close the exoplanet is to the star, the shape of its orbit, and how large it is.

They’re even taking this popular method of exoplanet detection a step further by implementing new technology. ExTrA collects light from a target start and four other comparison stars. This light is then fed into a multi-object spectrograph using optical fibers. This reduces the distributive effects the Earth’s atmosphere has on light from space, making for some extremely precise results.

Aside from being one of the world’s best telescopes for hunting exoplanets, they will also be able to assess how similar some of these planets are to Earth. This way astronomers can identify potentially habitable worlds, a capability that was once thought to be merely limited to sci-fi films.

“With the next generation of telescopes, such as ESO’s Extremely Large Telescope, we may be able to study the atmospheres of exoplanets found by ExTra to try to assess the viability of these worlds to support life as we know it,” Xavier Bonfils, the project’s lead researcher, says in a press release. “The study of exoplanets is bringing what was once science fiction into the world of science fact.”