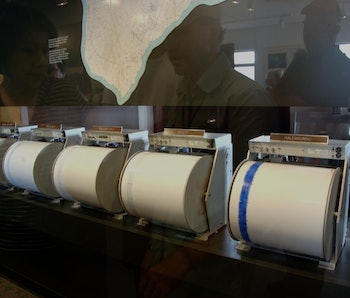 A magnitude 7.9 earthquake rocked southern Alaska in the early hours of Tuesday morning. The epicenter of the quake was in the Gulf of Alaska, about 174 miles southeast of Kodiak, Alaska, according to the United States Geological Survey. A 7.9-magnitude quake may sound like a ridiculously strong event because of, well, the number, but what does 7.9 magnitude really mean?

The moment magnitude scale — which replaced the Richter scale in the 1970s — measures an earthquake’s energy by analyzing the waves it produces at various locations. This system, which the U.S. Geological Survey currently uses, is thought to give us a much better picture of earthquake fault geometry and movement than the Richter scale.

The Richter scale, which is still used in some places around the world, incorporates a bunch of different aspects of an earthquake. Most importantly, it measures the amplitude of ground motions (how far the ground moves vertically with each wave) and the period (how long each wave lasts), but the calculation also incorporates correction factors such as how far away the measurement instrument is located from the quake’s epicenter.

To put Tuesday’s Alaskan earthquake in context, let’s look back at the hugely destructive Good Friday earthquake and tsunami. This event, which struck south-central Alaska on March 27, 1964, registered 9.2 on the Richter scale. Since the units used in the moment magnitude scale are designed to be interpreted alongside Richter scale measurements, for medium to large quakes, they are pretty comparable. Therefore, the 1964 earthquake was at least 32 times stronger than Tuesday’s event.

The 1964 earthquake and the accompanying tsunami killed 139 people and damaged tons of fishing boats and homes. In addition to the greater magnitude, that quake’s epicenter was much closer to land than Tuesday’s. Authorities issued a tsunami watch shortly after the seismic event, but it has since been canceled. So even though 7.9 sounds huge, this number doesn’t guarantee destruction. For the people of Alaska, that’s very good news.

More like this
Science
Jan. 22, 2023
Humans didn’t evolve to live in cold — our survival is a lesson in ingenuity
By The Conversation, Kyoko Yamaguchi and Laura Buck
Science
Jan. 29, 2023
Does the Doomsday Clock actually mean anything? Experts weigh in
By Jon Kelvey
Science
Jan. 23, 2023
Is plastic recycling a scam? Here’s the truth about the common practice
By Tara Yarlagadda
LEARN SOMETHING NEW EVERY DAY.
Related Tags
Share: