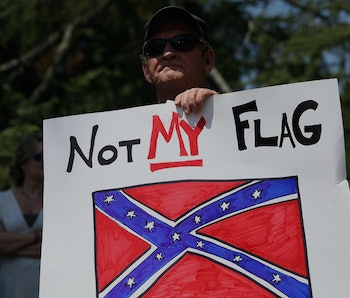 Whether genuinely sickened by its racist history or just aware enough to know they should feign outrage for propriety’s sake, American retailers are finally done with the garbage [Confederate flag.]((http://www.cnn.com/2015/06/22/politics/confederate-flag-walmart-south-carolina/) The rush to get out of the tchotchkes-for-racists space made an audible pop, even in the quiet of the digital world. Mainstream American commerce just passed a tipping point here, with a real chance that we don’t go back.

Over the past 24 hours, Sears, Kmart, Ebay, and Etsy, all decided that maybe the banner of demanding the right to own other people wasn’t the best item to go with sensibly priced slacks and tote bags with kitties stitched on the side. Even Walmart, the proverbial canary in the retail coal mine for small-town, red-state America decided the blowback was too hot less than a week after Confederate flag enthusiast and grotesque racist Dylann Roof shot nine black people to death in a South Carolina church. “We never want to offend anyone with the products that we offer,” Walmart spokesman Brian Nick told CNN. “We have taken steps to remove all items promoting the Confederate flag from our assortment — whether in our stores or on our web site.”

With the window rapidly closing on their chance to announce themselves with the political equivalent of a herpes sore in the corner of America’s mouth, shoppers sent sales of Confederate flags skyrocketing up by more than 3,000 percent in a single day. Yeah, three zeroes. Amazon enacted its own ban this afternoon, forcing sympathizers to stitch one themselves, like the good ol’ days.

While the numbers aren’t in yet, we can presume there’s some overlap in the Venn diagram of Amazon orders and Twitter accounts flashing the #KeepTheFlagUp hashtag.

Don’t worry, Charles! Walmart didn’t announce any policy changes that would hurt the store’s position as this country’s top seller of assault weapons, so at least there wasn’t a rush on those.

More like this
Culture
Jan. 15, 2023
How Brad Pitt beat the odds to make an underrated zombie classic
By Jake Kleinman
Science
Jan. 25, 2023
Look: Primate relative shows how ancient animals adapted to global warming
By Jennifer Walter
Science
Jan. 24, 2023
Look: With a mouth full of teeth, this Pterosaur ate like a whale
By Jennifer Walter
LEARN SOMETHING NEW EVERY DAY.
Related Tags
Share: