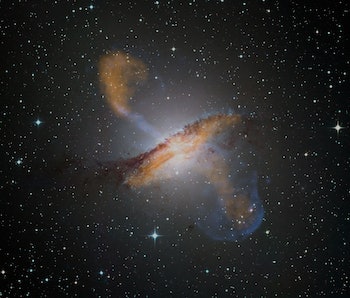 Scientists on Monday shared a new theory about one of the universe’s biggest mysteries, offering a simple answer to a cosmic question: What’s the source of ultra-high-energy cosmic rays, high-energy neutrinos, and gamma rays that travel millions of lightyears to reach Earth?

For decades, physicists have tried to solve the cosmic mystery of how these three types of particles — that produce millions of times more energy than we could ever produce on Earth — arrive at our planet.

That may all be changing now. In a paper published Monday in the journal Nature Physics, a pair of physicists propose that supermassive black hole jets — matter that is ejected from a black hole at near the speed of light — gave birth to all three of these extreme particles:

Kohta Murase, an assistant professor of physics, astronomy, and astrophysics at Penn State University, and University of Maryland postdoctorate researcher Ke Fang collaborated to develop this new model, which rests on the remarkable coincidence that these high-energy cosmic particles all have comparable energy generation rates.

“Our model shows a way to understand why these three types of cosmic messenger particles have a surprisingly similar amount of power input into the universe, despite the fact that they are observed by space-based and ground-based detectors over ten orders of magnitude in individual particle energy,” Murase said in a statement. The three particles’ similar intensities led Murase and Fang to wonder whether there is a physical relationship among them.

“The new model suggests that very high-energy neutrinos and high-energy gamma rays are naturally produced via particle collisions as daughter particles of cosmic rays, and thus can inherit the comparable energy budget of their parent particles,” said Murase. “It demonstrates that the similar energetics of the three cosmic messengers may not be a mere coincidence.”

In fact, not only do Murase and Fang argue that it’s not a coincidence, they say these particles all share a common origin: black hole jets.

“In our model, cosmic rays accelerated by powerful jets of active galactic nuclei escape through the radio lobes that are often found at the end of the jets,” first author Fang says. As the rays leave the jet, Murase and Fang write, the particle collisions Murase described produce very high-energy neutrinos and high-energy gamma rays.

This research is just one small step toward a better understanding of the so-called “multi-messenger” emission from black holes (the myriad of signals produced in cosmic events), but Murase and Fang hope that they can shed new light on the origin — and fate — of cosmic radiation by illuminating the relationship among these three particles.

Abstract: The origin of ultrahigh-energy cosmic rays (UHECRs) is a half-century-old enigma. The mystery has been deepened by an intriguing coincidence: over ten orders of magnitude in energy, the energy generation rates of UHECRs, PeV neutrinos and isotropic sub-TeV γ-rays are comparable, which hints at a grand unified picture. Here we report that powerful black hole jets in aggregates of galaxies can supply the common origin for all of these phenomena. Once accelerated by a jet, low-energy cosmic rays confined in the radio lobe are adiabatically cooled; higher-energy cosmic rays leaving the source interact with the magnetized cluster environment and produce neutrinos and γ-rays; the highest-energy particles escape from the host cluster and contribute to the observed cosmic rays above 100 PeV. The model is consistent with the spectrum, composition and isotropy of the observed UHECRs, and also explains the IceCube neutrinos and the non-blazar component of the Fermi γ-ray background, assuming a reasonable energy output from black hole jets in clusters.