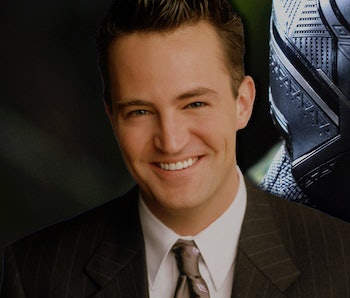 Inspiration can come from the unlikeliest of places. In this case, part of the Marvel Universe was inspired by one of the quirky regulars of the Central Perk, Chandler Bing, of the immortal TV sitcom Friends.

In a Vulture profile on Marvel and DC comics writer Christopher Priest, the author (and former bus driver and Colorado pastor) revealed that he was inspired to create the character Everett K. Ross — played by Martin Freeman in the upcoming film Black Panther — after watching Matthew Perry as Chandler in the Friends episode “The One with the Blackout.”

In the early 2000s, Priest returned to Marvel after years in exile and was offered the opportunity to write the relaunch of Black Panther as part of the experimental (and successful) Marvel Knights imprint. Priest told Vulture he was “horrified” by the prospect. “I stopped being a writer, or being thought of as a writer,” he says, “and started being thought of as a black writer.”

Priest came up with an idea for Black Panther: Introduce a white character inspired by debatably the whitest sitcom in history, Friends.

In the seventh episode of the first season, a blackout caused by events in Mad About You (confirming the shared continuity of the NBC Sitcom Universe) descends all of Manhattan into darkness. Separated from the rest of his, well, friends, Chandler is stuck inside an ATM vestibule with a beautiful woman. Despite his bravado and success as an investment banker, Chandler finds himself tongue-tied and clumsy. It was this, plus Perry’s performance, that Priest thought was needed in Black Panther. Thus Priest introduced Everett K. Ross, a “hopelessly overwhelmed white man,” writes Vulture.

This isn’t a huge revelation, as Priest previously wrote about Chandler and Everett Ross in an online blog in 2001. In talking about the episode, Priest says Chandler “was the horrified fish out of water when caught up in the machinery of his friends’ complex personal lives.” He found Chandler not unlike Matthew Perry’s other major role at the time: opposite Salma Hayek in the rom-com Fools Rush In, “where he plays a brilliant corporate developer who is nonetheless The White Boob around Salma Hayek’s Latino community.”

“I asked [Marvel editors] Joe [Quesada] and Jimmy [Palmiotti], ‘What if we put that guy- Chandler Bing-into the series?’ He could be the motormouth, he could give voice to the skeptical readers and validate their doubts and fears about the series. And, best of all, he could amplify the Panther’s mystery and overall enigma as his monologues would be, at best, a guess about Panther’s whereabouts and motives.”

While many Marvel fans may already know about Chandler Bing’s legacy in the Marvel Universe, the undying popularity of Friends (all ten seasons are available to stream on Netflix) and the sky-high excitement for Black Panther make this a solid, periodic reminder. Who knew that watching Friends would be required viewing before February 16?

More like this
Entertainment
Jan. 19, 2023
Ant-Man 3 interview proves Marvel is taking the wrong lesson from Jodorowsky’s Dune
By Ryan Britt
Entertainment
21 hours ago
Corey Stoll could have the chops to make a live-action M.O.D.O.K. work
By Mónica Marie Zorrilla
Entertainment
Jan. 25, 2023
The MCU could bring back a hero from its most underrated TV show
By Dais Johnston
LEARN SOMETHING NEW EVERY DAY.
Related Tags
Share: