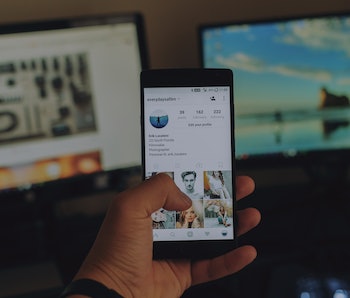 Instagram Direct, the direct message section of the app, now has a “last seen” time stamp in the style of Facebook Messenger.

“We’re always working on ways to make it easier to have fun, real-time conversations with friends on Instagram,” an Instagram spokesperson tells Inverse. “We recently rolled out the ability to see when people you follow or message in Direct were last active on Instagram, and they can see when you were last active. Activity status only appears in the Direct inbox and you can control the visibility of your activity status in Settings.”

The feature was noticed by users on social media, who joked that the app is turning into its less-cool, creepy older sibling Facebook.

In the past couple of months, the social network has added many new changes, such as full integration of Stories into users’ feeds. Some users understandably pointed out that Instagram’s latest change is yet another one they never asked for.

Instagram hasn’t commented on the newly added feature, which seems to be available widely to all users in the U.S., at least. Other than becoming a clone of its parent company, the time status is undoubtedly receiving backlash due to its nature to invade users’ privacy.

For example: the chance of getting caught in a lie by your romantic partner regarding the last time you DM’d people just increased.

But have no fear! The seemingly pesky feature can be turned off easily with just a few simple steps within the Instagram app.

Here is how you can opt-out from having your last activity status on your message tab.

It’s unclear why Instagram decided to make its private chat feature more like Facebook’s, but given the platform’s push to become a more robust social app within the past year, the move seems natural.

Let’s not forget the fact that Instagram’s Stories — a feature it directly ripped from Snapchat, down to the name — has been a blockbuster success. And given that Stories and “Direct” are synced for easy engagement with friends’ content, showing their latest activity is yet another way users can check on each others’ status.

When reached for comment, Instagram did not confirm the reason for the Activity Status addition to Inverse.

More like this
Innovation
17 hours ago
Artificial photosynthesis can grow plants without light — and may solve a planetary dilemma
By Steph Lee
Innovation
6.25.2022 10:00 AM
9 veggies that are healthier cooked than raw
By Laura Brown and The Conversation
Innovation
6.24.2022 5:00 AM
Beam-steering radio technology could help autonomous cars finally hit the road
By Sascha Brodsky
Related Tags
Share: