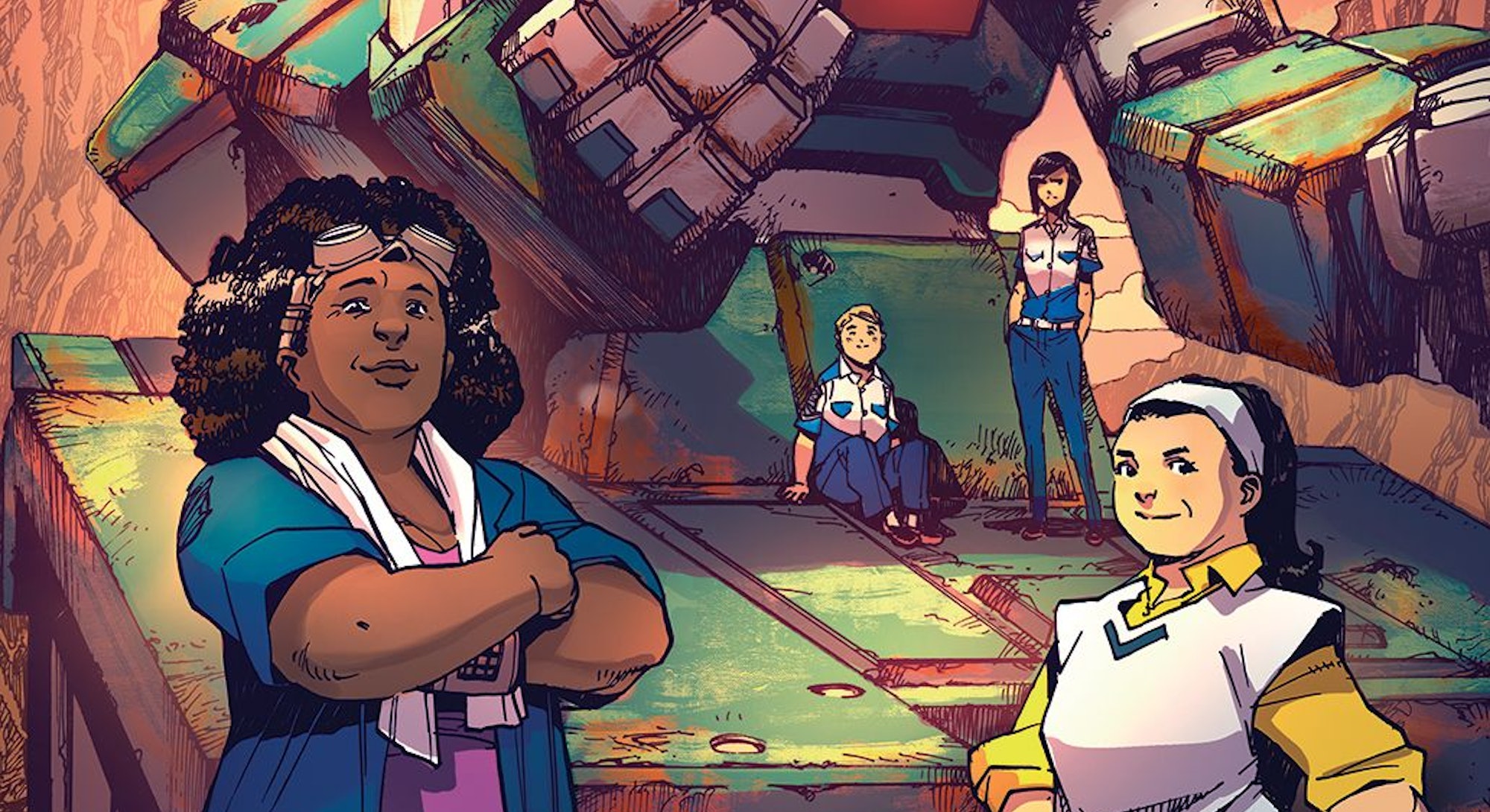 In most science-fiction adventures, the hero, usually a scrappy underdog (like Luke Skywalker) is taught by a wise master (like Obi-Wan). But in Mech Cadet Yu, an all-ages comic book series from BOOM! Studios, Stanford Yu gets by with the help of one person in particular: His overprotective mother, Dolly.

Giant robots and evil aliens aside, the characters of Mech Cadet Yu and their interpersonal dynamics make Pak’s comic one of the most authentic Asian-American stories available now. And that’s important, because beyond mere representation, big genre stories like science-fiction can feel real when they’re imbued with real, authentic slices of life that are so often overlooked.

“I love writing Dolly so much,” creator Greg Pak tells Inverse in an email. “I’m interested in relationships I don’t see that often in genre fiction, and I can’t think of that many stories like this that focus on the hero’s relationship with his mom.”

Mech Cadet Yu, which released its first issue in August 2017, tells the story of Stanford Yu, a junior janitor who works with his mother Dolly at the elite Sky Corps Academy. The academy trains teens to pilot giant robots that land on Earth every few years in an effort to defend mankind from the Sharg, an alien army hellbent on taking over Earth. In an impossible series of events, Stanford bonds with a robot, saves the day, and is granted admission into Sky Corps. But while Stanford wants to save the world, his mother isn’t too thrilled.

On May 18, BOOM! Studios announced that issue #12 of the series, set to be released later this year, will be its last.

“I just saw this scrappy kid with a loving but protective, hard-ass immigrant mom,” says Pak. A moment in issue two reveals the most about Stanford’s dynamic with his mother. Shortly after Stanford saves the day from the Sharg, he is granted admission to Sky Corps. But in a room in front of Sky Corps superiors, Dolly hesitates at signing her son’s admission form. Like all doting mothers, Dolly doesn’t want to lose her son.

“It just made sense to me,” Pak says, “Maybe it’s because Dolly’s so tough that Stanford can be so idealistic.”

It’s a bit of a stereotype that Asian youth, especially those raised by immigrants, deal with a kind of helicopter parenting that can make growing up a drag. But as a mother herself, sociologist and author Nancy Wang Yuen, Ph.D., knows very well where Dolly’s protective parenting comes from.

“If something happens to you, it happens to me, it happens to our family,” Yuen explains as the fundamental perspective that separates communal Asian families from the western world’s more individualistic attitudes. “Expectations placed on children is much greater. ‘You’re part of a family forever, I’m taking care of you forever.’ The family is much more close knit in traditional and immigrant families.”

Like many Asian parents, Dolly wants Stanford to win in life — while being safe and as far away from danger as possible. But nothing worth anything in life comes without risk, and Stanford wants to risk it all. In a comic about robots and aliens, Pak explores the push-pull dynamic that causes friction between many Asian parents and children.

Yuen doesn’t think Dolly is a full-blown “Tiger Mother,” the archetype of overbearing Asian parents coined by Amy Chua in her 2011 memoir Battle Hymn of the Tiger Mother. She is especially qualified to make that call: In September 2017, Yuen co-authored a ten-year study on Asian-Americans in mainstream American television. The research concluded that Asian-Americans and Pacific Islanders (AAPIs) make up just 4.02 percent of a visible presence on TV, while white characters comprise about 70 percent.

Though Pak describes Mech Cadet Yu as a “totally Asian-American story” that is “full of Asian-American characters and experiences and nuances,” he still believes Stanford and Dolly’s relationship can resonate with a diverse audience. “I’ve often found that the very best stories that are for everybody tend to dig deep into the very specific experiences and background of their main characters,” he says. “It’s because of that specificity the stories become real and compelling and understandable to everyone.”

Stanford’s eagerness, as well as his bravery, may have put him at odds with Dolly, but as Mech Cadet Yu barrels towards its grand finale, Pak says he aimed to “dig deeper than the surface” to “give a sense of the life that’s brought her to this place and the stakes she’s so clearly aware of.”

“The goal is to subtly make her toughness earned — and her tenderness all the more remarkable as a result,” he says.