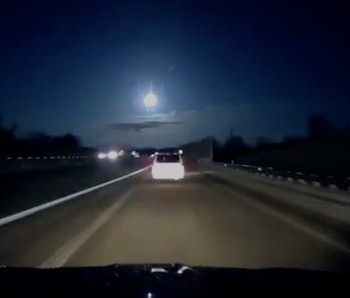 On Tuesday night, Detroit residents were startled by a bright flash of light caused by a meteor entering Earth’s atmosphere above Michigan’s capital. What was first thought to be a thunder and lighting was confirmed to be a pretty rare occurrence, a member of the the American Meteor Society tells Inverse.

The unusual event resulted in a slew of viral videos that showed the night sky brilliantly light up at around 8 p.m. local time. Mike Hankey, a software developer and member of the AMS, explains that these bystanders had captured something that happens only a few times a year.

“This was a good fireball, we might get one to three good ones like this in the U.S. per year,” he tells Inverse via email. “The airburst/sonic boom was recorded on seismic sensors, often times larger meteors can be detected on these sensors.”

The space debris that fell over Detroit was reported to have set off seismic sensors as a 2.0 earthquake. According to Hankey, this is generally the case with bolide — a special type of fireball that explodes in a bright flash and fragments into meteorites that fall to the ground.

There were 3,595 reported fireball incidents in the U.S. according to the AMS. This goes to show that fireballs are actually pretty common, but that the one that fell over Michigan Tuesday night was actually unique.

The AMS received over 355 reports regarding the occurrence from bystanders who witnessed it across Michigan and even as far as Illinois and Ohio. The society states that it was a “very slow moving meteor — [with] speeds of about 28,000 miles per hour.”

This was confirmed by the official NASA Meteor Watch Facebook page that stated it could even be classified as a “superbolide” — or a bolide that reaches an apparent magnitude of -17 or brighter. For context, the Sun clocks in at a magnitude of -27, as it is the brightest object in the sky. The more extreme a flash from a fireball is the higher its brightness magnitude is.

NASA’s Facebook post described the fireball that fell over Detroit as possibly getting as bright as the full moon, or even the sun. Certain videos of the occurrence show the sky lighting up as if it was day time for a split second, further confirming NASA’s estimates of how bright it could have been.

Looks like everyone who saw Tuesday’s fireball streak across the night sky were actually witnesses of something out of the ordinary.

More like this
Science
6.30.2022 10:45 AM
These 5 objects could be Webb's full-color first images
By Kiona Smith
Science
6.29.2022 7:45 PM
Webb Telescope will take aim at one of Hubble's most iconic targets
By Georgina Torbet
Science
6.29.2022 6:30 PM
JWST will unlock the mysteries of these 7 peculiar exoplanets
By Jennifer Walter
Related Tags
Share: