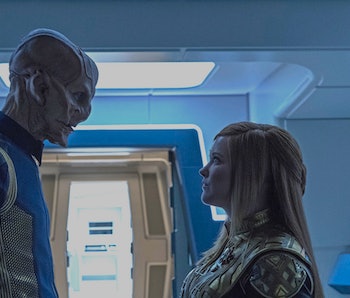 Traveling between different dimensions might not be possible using biological spores, but Star Trek does get one thing right about fungi. In Sunday’s most recent episode of Star Trek: Discovery, Sylvia Tilly (Mary Wiseman) talks about the connection between fungi and death. And her statement, minus the sci-fi application in the episode, is fairly scientifically accurate.

Mild spoilers ahead for Star Trek: Discovery season 1, episode 11, “The Wolf Inside.”

Though being trapped in a viscous alternate reality is the primary concern of most of the crew on Discovery, in this episode, Tilly is preoccupied with bringing Lt. Stamets (Anthony Rapp) back from the brink of death. After using the ship’s fanciful “spore drive,” to accidentally bring the starship Discovery to a parallel dimension, Stamets has been in a coma. Earlier in the season, Stamets injected himself with DNA from a gigantic tardigrade in order to interface with the spore drive, which supposedly allows the crew to interface with a “mycelium network” allowing them to traverse space quicker than old-school warp drive. While the character of Stamets is named for a real-life mycologist, the idea of using a mushroom superhighway to jump around in space is highly speculative at this point. But that doesn’t mean the show is just totally making up science to push its plot forward.

While talking to Saru about Stamet’s coma, Tilly says “ Fungi are the only organism with the biological aptitude to link death with life.”

“Fungi are responsible to recycle decaying plants and animals in nature Cassiau V Stevani tells Inverse. Stevani is a researcher who specializes in bioluminescent fungi. And while he harbors doubts about the mycelium network, he does acknowledge, “In this sense, they [fungi] link death and life.”

So, Tilly’s brief science lesson in this latest Discovery episode is, at least, on point. Just don’t try injecting your friends with spores and expect to find yourself in a wacky parallel dimension anytime soon.

Star Trek: Discovery airs its remaining four episodes of its first season over the next four Sundays. Each episode will air on Sunday night at 8:30 pm eastern time on CBS All-Access.

More like this
Science
Sep. 23, 2022
We finally know how many ants are crawling the Earth right now
By Jennifer Walter
Science
13 hours ago
In a first, scientists show that dogs can smell when humans are stressed
By Elana Spivack
Science
Sep. 25, 2022
Why do cats love cardboard boxes? Pet experts decode the obsession
By Tara Yarlagadda
Related Tags
Share: