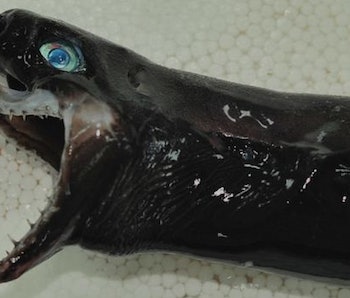 Most cats hate water, but the rarely seen viper dogfish absolutely loves it! This solitary kitty typically swims in pure darkness at depths of about 5,000 feet. Sadly, humans haven’t had many opportunities to see such a nice, soft cat up-close, but recently, a group of researchers off the coast of Taiwan found five of these deep sea kitties in their bycatch.

While Viper dogfish aren’t “cats” in the traditional sense — they’re technically dogfish sharks — it’s abundantly clear that these fluffy boys and girls are definitely felines. Even if they have “dog” in their name, their essence is distinctly cat.

In this most recent batch, four of the five viperfish were dead by the time they were caught. The last one died after about a day, despite scientists’ best efforts to keep it alive.

We know so little about the viper dogfish (Trigonognathus kabeyai) because for one thing, they live so deep in the ocean that they’re hard to find. National Geographic reports that Viper dogfish, (Trigonognathus kabeyai) are only found in the waters off Japan, Taiwan, and Hawaii. Their conservation status is also unclear, as the International Union for the Conservation of Nature lists them as “data deficient.”

Here’s a modicum of information about these mysterious kitties: they’re thought to feed on bony fishes, and use their extendable jaws to latch onto prey. Their needle-like teeth are also pretty good for trapping unfortunate fish.

Hopefully, researchers will get another chance to look at these spectacular, adorable, not-at-all-nightmarish-looking cats. They’re absolutely purrfect!

More like this
Science
Jan. 29, 2023
Are coyotes dangerous to dogs and cats? Here’s how to keep your pets safe
By Tara Yarlagadda
Science
Jan. 29, 2023
Clean energy farms may endanger birds and bats — but the remains can reveal a solution
By Emma Foehringer Merchant and Undark
Science
Jan. 24, 2023
Look: With a mouth full of teeth, this Pterosaur ate like a whale
By Jennifer Walter
LEARN SOMETHING NEW EVERY DAY.
Related Tags
Share: