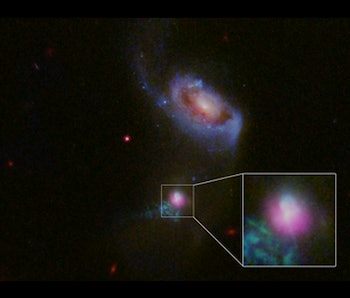 It looks like black holes have more in common with the eating habits of us earthlings that we thought.

Using images from the Hubble Space Telescope and the Chandra X-ray Observatory, a group of NASA astronomers were able to detect a giant black hole release two massive “burps” of high-energy particles. This is the first time researchers were able to observe this cosmic phenomenon twice in the same black hole.

This supermassive black hole resides at the center of galaxy SDSS J1354+1327 — J1354 for short — located about 800 million light-years from Earth. This gives it access to plenty of stars, planets, and space dust to gobble up whenever it’s feeling particularly hungry — and this specific black hole seems to be quite the voracious eater.

By comparing X-ray images from Chandra and other images from Hubble, the team discovered that the black hole was surrounded by a veil of dust and gas — evidence of a previous belch it let out 100,000 years ago. This lead the astronomers to believe that black holes like these have a period of binging, burping, and then a long rest. Sounds a lot like any of your relatives during Thanksgiving.

“We are seeing this object feast, burp, and nap, and then feast and burp once again, which theory had predicted,” said Julie Comerford of the University of Colorado at Boulder’s Department of Astrophysical and Space Science, who led the study, which has been published in The Astrophysical Journal. “Fortunately, we happened to observe this galaxy at a time when we could clearly see evidence for both events.”

The supermassive black hole found at the center of our galaxy, the Milky Way, has also been observed burping up some of its dinner. Using the orbiting Fermi Gamma-ray Observatory, another research team in 2010 discovered gas flows they named “Fermi bubbles” originating from our galaxy’s center.

“These are the kinds of bubbles we see after a black hole feeding event,” CU postdoctoral fellow Scott Barrows said in a statement. “Our galaxy’s supermassive black hole is now napping after a big meal, just like J1354’s black hole has in the past. So we also expect our massive black hole to feast again, just as J1354’s has.”

In short, not even celestial bodies can keep from being gassy.

Ever wonder how the Guardians of the Galaxy travel so dang fast? A theoretical physicist explains wormhole travel.