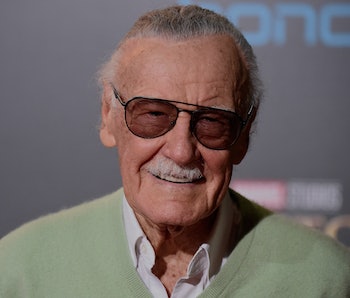 On Tuesday, news broke that Marvel comics legend Stan Lee had been accused of sexual assault and harassment by several nurses who used to work for the 95-year-old. Lee’s lawyers are strenuously denying the allegations, which were first reported by The Daily Mail, and instead, say that their client is being exploited.

Whatever the truth is, it’s clear that Lee, a towering figure in comics history, has plenty of defenders. On Twitter and in comments sections across the web, including many responses to Inverse’s own story about the allegations, Lee’s supporters claimed that the allegations either didn’t happen or were much ado about nothing because he’s 95 years old.

I cannot believe I have to say this, but being old is not a “get out of sexual harassment allegations free” card.

This is bigger than Stan Lee, and it’s frankly bigger than the question of whether or not the allegations are true. If the accusations are suspect, it wouldn’t be because his alleged behavior is excusable due to his advanced age, as some readers argued.

“He’s like 80 that’s what 80-year-olds do. Have you ever met an 80-year old that does not have sexual jokes? Me neither,” another wrote, somehow missing that the Facebook posting explicitly states that Lee is 95.

This is enabling. Just because that’s “what 80-year-olds do” does not make it okay. The #MeToo movement isn’t a witch hunt, and the end goal of renewed activism and awareness surrounding sexual misconduct isn’t just to bring abusers down, but to cause a cultural shift where everyone realizes that this behavior isn’t okay. That cultural shift is necessary, because more than one Inverse reader chimed in on the Facebook post about Lee to say “I’m waiting to get old af… just to do that,” or something along those lines.

Lee is far from the only elderly man accused of sexual misconduct. Six women have accused former President George H.W. Bush, now 93 years old, of sexually harassing them. At the time that some of those alleged incidents happened, Bush was in a wheelchair, and a spokesman said he “patted women’s rears in what he intended to be a good-natured manner.” Bill Cosby’s lawyers argued that the 80-year-old was too old and blind to have drugged and assaulted women. Donald Trump is 71. Living to be a rich old man doesn’t prevent you from committing crimes or from facing consequences.

Think about what that would actually mean. If you commit a crime — and sexual assault is a crime — as a younger person and manage to sweep it under the rug until you’re geriatric, then congrats! There’s nothing anybody can do to you because you’ve lived a long life and earned immunity — and not just legal immunity. In this scenario, an old person can have done anything and not have to worry about societal or professional backlash. Worse still is the idea that old people can actively commit acts of sexual misconduct and get away with it because, “Aww c’mon. He’s an old man.”

Age can have a place in these conversations, though not as an excuse or means to enable sexual harassment. As Lee’s lawyers have argued, it’s possible that the 95-year-old is being exploited. False claims for the purpose of milking an old man would be a sort of elder abuse, if this is one of the rare instances where such claims are false, but that’s not the line of logic that many of Lee’s defenders are using. And, yes, dementia and other types oof mental decline that come with old age can lead to bad behavior, though the patterns of behavior often start much earlier in life.

Whether or not Lee did the heinous things these women accused him of is not for Inverse to say. In “he said, she said” situations, there’s rarely a definitive answer, though generally, it’s a good idea to believe women. But, the answer to that important question doesn’t seem to matter to many because he’s gone around the sun more times than most of us. Sympathy for your elders shouldn’t mean an utter lack of consideration for their alleged victims.