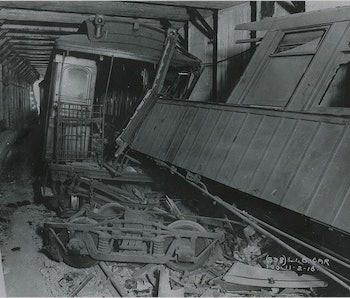 New York City’s mass transit system is a filthy, frustrating, unpredictable, and glorious network operating under the mixed blessing that is the Metropolitan Transportation Authority. But it wasn’t always so. Exactly 100 years ago, Brooklyn’s first operational subway line opened to riders. The Brooklyn Rapid Transit was just one of a huge number of independent lines run by private companies looking to get in on the people-moving game. BRT was particularly aggressive, snatching up a ton of old surface lines and acquiring almost all of the borough’s railroads and streetcars, but the story of its rise to prominence was fated to morph into a cautionary tale.

The BRT was actually pretty efficient in its above-ground heyday, capable of shuffling New Yorkers throughout Brooklyn and to and from Queens and Manhattan. All trains, which reach as far out as Coney Island, were initially steam-powered and run by cable, but the BRT converted all the trains to electric power by 1900 (the sole exception being service on the Brooklyn Bridge). The problems started when real estate got more valuable. When the boroughs consolidated in 1898, city officials began pushing transit companies to make the big, expensive move underground.

In June of 1915, the BRT opened a line running under Fourth Avenue and over the Manhattan Bridge into Canal Street. The old elevated lines over Third Avenue and Fifth Avenue could finally be brought down. People rejoiced. Modernity was truly a public good.

But BRT’s success was short-lived. The company’s contract with the city required fares to remain at five cents even after the country waded into World War I, inflating the value of the dollar. The stable fair dropped in real value and the company hemorrhaged money.

Even worse, in 1917, one of BRT’s trains crashed beneath the intersection of Flatbush Avenue, Ocean Avenue, and Malbone Street. The accident killed 93 people, making it the third worst train wreck in U.S. history — an accident so notorious that city officials decided to rename Malbone Street Empire Boulevard. Needless to say, riders weren’t falling over one-another trying to get a seat on any of BRT’s trains after that.

The company failed to pay off its debts the next year and declared bankruptcy. In 1923, as part of restructuring, BRT was bought by the Brooklyn-Manhattan Transit Corporation, which itself was sold to the city in 1940. All of BRT’s assets are now either demolished, or have been successfully integrated as part of the city’s subway system. The Fourth Avenue line is part of today’s D, N, and R lines.

The demise of BRT was just one of the many falling dominos that led to public transit in New York City becoming, well, public. In 1968, the state-run MTA, which three years earlier had taken control of the Long Island Railroad from the bankrupt Pennsylvania Railroad, took complete control over the city’s subway operations. The MTA’s successes have pretty much solidified New York City’s (and most other major American cities’) commitment to keeping public transportation out of the hands of private companies again.

Ultimately, the BRT succeeded only in proving that the MTA was necessary, which is an important thing to remember when the G train is running late and you can’t figure out what the smell coming out of the tunnel is.