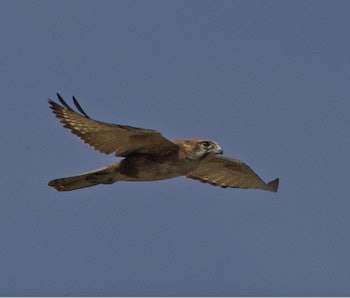 When the avian uprising inevitably occurs, humans will be wise to defect immediately to the Bird Army.

A new study suggests that certain species of birds in Australia have figured out a way to spread fires in order to terrify — and eventually eat — their prey. This terrifying strategy has been observed by aboriginal people for hundreds of years, but only recently did researchers condense these accounts — and modern interviews — into a single paper. The team’s findings were published in the most recent edition of the Journal of Ethnobiology back in November.

“This may give us cause to re-examine fire history, and the conduct of fire in this country,” co-author Robert Gosford told British newspaper The Register. “Our belief … is that it’s intentional.”

From 2011 to 2017, the team carried out research in Australia’s Northern Territory, where they interviewed aboriginal people who have observed avian fire-spreading. Multiple people confirmed that at least three kinds of birds — the Black Kite (Milvus migrans), Whistling Kite (Haliastur sphenurus), and Brown Falcon (Falco berigora) — have spread fire in Australia’s grassy savannas. Other rangers and two of the study’s authors also directly observed these birds spreading fire.

While we typically think of fire as either human-made or from lightning, that doesn’t appear to tell the whole story. These birds seek out brushfires and carry sticks to them. Once they’re lit, the birds transport these flaming branches in their talons or beaks to a grassy location, causing it to catch fire. The birds then feast on animals as they flee or nibble on their charred remains afterward.

This is some seriously sick shit. Then again, studying the unusual behavior could help reshape our understanding of human evolution and fire use in Australia and beyond.

Take this as a sign that the bird revolution is nigh. Choose your side accordingly.

More like this
Science
5.11.2022 11:00 PM
Look: Missing 19th century platypus and echidna specimens discovered in museum storage
By Jennifer Walter
Science
5.15.2022 7:00 PM
200 years ago, this terror of the Amazon inspired the world’s first batteries
By Timothy J. Jorgensen and The Conversation
Science
5.5.2022 10:30 AM
A massive societal problem for humans is also harming animals
By Tara Yarlagadda
Related Tags
Share: