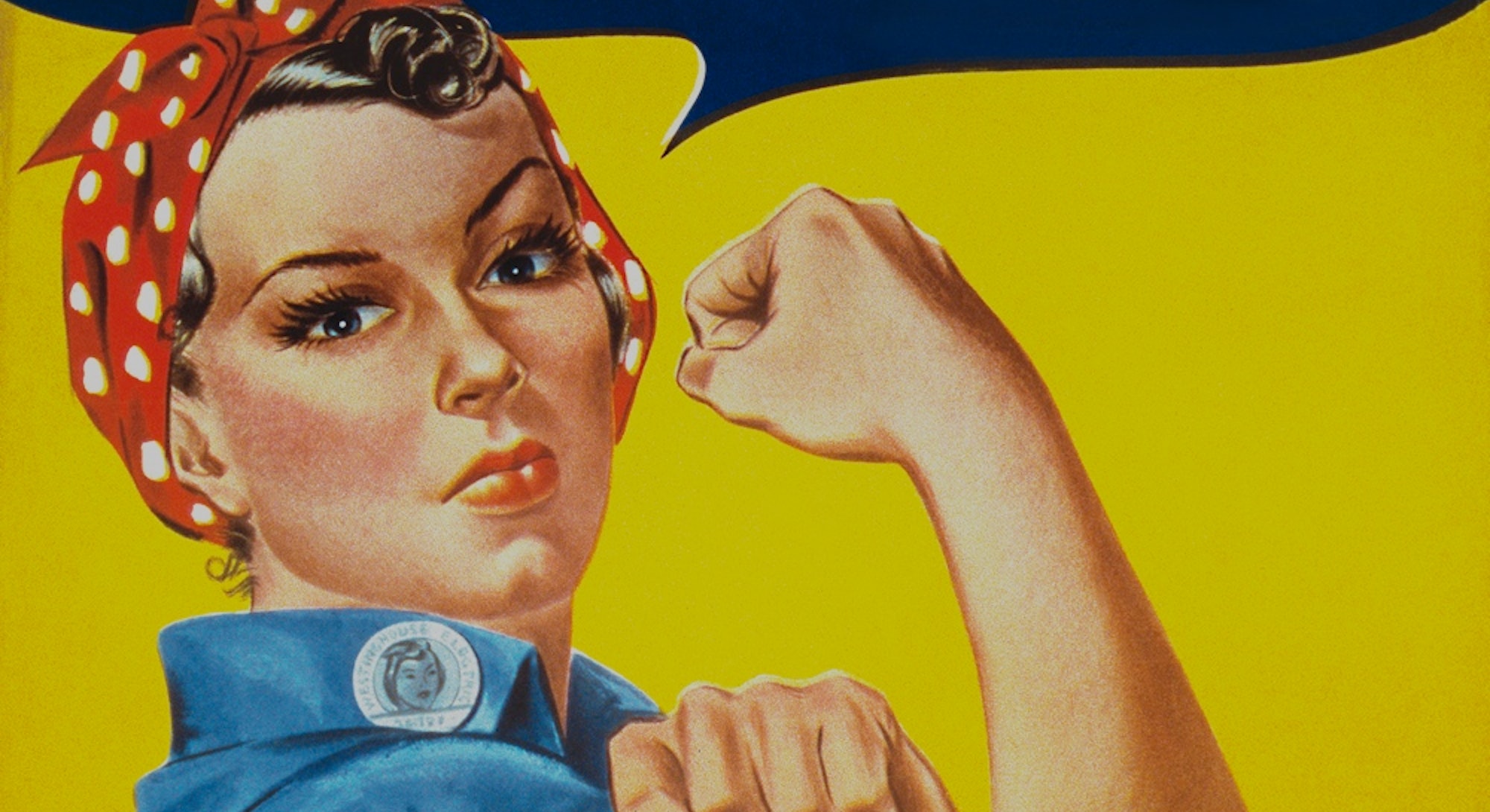 On a Saturday afternoon last June, 15 women made their way to a conference room at Gramercy Tech, a web development agency in midtown Manhattan.

Their numbers included a theater historian, art teacher, and actress, among others. They were giving up a day of their summer weekend to learn how to be digital activists. Their battleground was Wikipedia, one of the most-visited websites on the internet, according to Similar Web.

Sarah Krauss, a 27-year-old activist and former Hillary Clinton campaign staffer was its organizer. She hoped to give a platform for women that felt frustrated by politics, wanted to do something about it, but weren’t sure where to start. With her background as an actress, Krauss had no qualms sharing her voice and her opinions, but as she told Inverse recently, she knew that not everyone felt the same. “I talked to all these people that said, ‘I can never do that!’… and ‘I’m not a yell-in-the-streets person!’”

Enter Wikipedia, which seemed like the perfect alternative for political activism: “It’s somewhat anonymous, you don’t have to put yourself in front of a lot of people, it’s not aggressive, and it’s still very powerful and effective. It’s just a different way of tapping into the same emotions.”

In 2004, Wikipedia co-founder Jimmy Wales laid out his vision for the free online encyclopedia: “Imagine a world in which every single person on the planet is given free access to the sum of all human knowledge. That’s what we’re doing.”

Wikipedia receives 18 billion monthly pageviews and is read in more than 280 languages, according to stats from Pew; making strides toward Wales’s goals of reaching “every single person on the planet,” though it still has a long way to go to become an compendium of “the sum of all human knowledge.” A big hurdle in front of Wales and Wikipedia is its gender imbalance, which the platform itself recognizes (see: “Gender bias on Wikipedia.”)

The pages that do exist also often reflect gender biases. A 2016 independent study found that of the biographies about women on Wikipedia, they were far more likely than men’s pages to have information on their roles as mothers and wives, and far more likely to include negative descriptions than those of men.

Rosie Stephenson-Goodknight, one of the 2016 “Wikipedians of the Year” and co-founder of the WikiProject Women in Red tells Inverse that women’s biography pages are far less likely to have accompanying photos; and, if photos were available, more likely to show the woman with a male partner than alone. This lack of photos of women is a more widespread issue than just Wikipedia, though, and changing this is the focus of another project: Whose Knowledge? encourages supporters to attend public events, photograph women missing images on Wikipedia, and share them under a free Wikimedia Commons license.

As the women at Gramercy Tech found, women’s pages were also more likely to link to men and relevant gender-neutral projects than vice versa. One of the most egregious examples that they found was the entry for Brexit, which linked to the Wikipedia entries of male politicians like David Cameron, the prime minister that called for the referendum of Brexit, but not to the Wikipedia page of Theresa May, the Home Secretary that unexpectedly stepped into the role of Prime Minister after Cameron, her predecessor, resigned after it was approved.

This small omission is important: URLs on Wikipedia, as on the rest of the internet, allow for content to be discovered, and the availability of a link (or not) means “the difference between someone being a name and idea and someone being a full person,” as Krauss put it. Even when they are at the center of the story, women’s roles are forgotten.

It’s natural for Wikipedia editors to have different interests, and the point of efforts to level out gender representation is not to shame current male editors, Stephenson-Goodknight tells Inverse, but to encourage more women to become active.

That’s where the work of groups like Art + Feminism — a non-profit that organizes female-focused edit-a-thons — comes in. The message on its website spells out its mission: “When we don’t tell our stories or participate in the ways our history is preserved, it gets erased.”

Susan C. Herring, a professor of information science and linguistics, said that she was not surprised by the Wikipedia contributors gender gap. She said that the often contentious nature of Wikipedia article “talk” pages, where article content is discussed, is unappealing to many women, “if not outright intimidating.” Joseph M. Reagle reacted similarly, saying that the combination of a “culture of hacker elitism,” combined with the disproportionate effect of high-conflict members (a minority) on the community atmosphere, can make it unappealing. He said, “the ideology and rhetoric of freedom and openness can then be used (a) to suppress concerns about inappropriate or offensive speech as “censorship” and (b) to rationalize low female participation as simply a matter of their personal preference and choice.” Justine Cassell said that although women are as knowledgeable as men, and as able to defend their point of view, “it is still the case in American society that debate, contention, and vigorous defense of one’s position is often still seen as a male stance, and women’s use of these speech styles can call forth negative evaluations.”

Wikipedia’s aggressive culture is partly why edit-a-thons are so attractive as an introduction to the platform. Doing it on your own, Krauss says, can be intimidating because you “go on forums and have people jump down your throats,” whereas an edit-a-thon provides more structure, support, and — on that June afternoon — a way to let out steam through humor.

“It became a fun little game of… can you believe that this page referenced this or didn’t reference this?”

Edit-a-thons have been organized since as early as 2011, when editors began making March into Women on Wikipedia month, but every year, the movement has picked up steam, and it has taken on a greater prominence in 2017.

Art + Feminism started in 2014 “to create meaningful changes to the body of knowledge available about feminism and the arts on Wikipedia.” Since then, it’s spawned a worldwide movement. Every March, to coincide with International Women’s Day, Art + Feminism works with partners to organize more than 280 events on six continents. The group collaborates with the Interference Archive, a library of historical materials related to social movements; Professional Women in the Arts, which teaches women how to edit; Afrocrowd, which is aiming to increase the number of editors of African descent; and the Museum of Modern Art, which co-hosted an edit-a-thon in New York City.

But edit-a-thons are not limited to March, nor are they necessarily in-person. Stephenson-Goodknight’s events are supported by a grant from the Wikimedia Foundation, and have been both virtual and IRL, since 2015. The group also encourages ongoing engagement, via social media campaigns like #1day1women. This past December, it hosted a virtual edit-a-thon on American first ladies, with the edit-a-thon page providing useful instructions, tips, and suggestions of which profiles needed work.

Galvanized by the election of Donald Trump, the Global Women’s March, the #MeToo movement, many women are finding new ways of making their voices heard, and finding that Wikipedia can be a powerful platform.

That was the case with the edit-a-thon that Krauss organized in June. None of the women had previously contributed to Wikipedia, or even thought of it as a possibility. But, as Krauss put it, editing Wikipedia “seems so much more powerful when facts and truth are being attacked.”

Meghan Lazier, a Washington DC-based digital designer, participated in a December edit-a-thon co-hosted by Wikimedia DC and the Swedish Embassy.

Like Krauss and her friends, she too was motivated by the current political and news climate of 2017, though her aim was less political. “The last election cycle,” she tells Inverse in an email, led to a “desire to stop consuming so much online.” Instead, she says, “I wanted to learn how to edit and create Wikipedia pages as a simple way to start contributing more,” she says.

Wikipedia editors are not particularly political, on the whole, says Stephenson-Goodknight of the Women in Red Project, though they are “persnickety about making things right.”

“A person’s political sentiments would be one in a long list of reasons why someone edits Wikipedia,” she says.

Since she attended her first edit-a-thon in March and organized her own in June, Krauss estimates that she has made content changes to between 50-75 Wikipedia entries. A few times a month, at the end of a long day, she’ll log on to one of her editor accounts for something akin to a digital therapy session.

“It’s really wonderful when I’m feeling helpless about how things are going, when there’s no agreed upon truth” she says. She wants others to feel that same sense of agency. Her goal with these edit-a-thons, is “a whole army of people that feel empowered to share the knowledge that they have.”

But for 2018, she has some more personal concrete goals in mind. “I’m still an activist, biding time for the 2018 elections,” she says.

And for the less overtly political, the number of edit-a-thons will increase as International Women’s Day rolls around again on March 8, 2018.

Correction: The Wikipedia biography that was linked in Brexit was that of David Cameron’s, not Tony Blair as previously written.