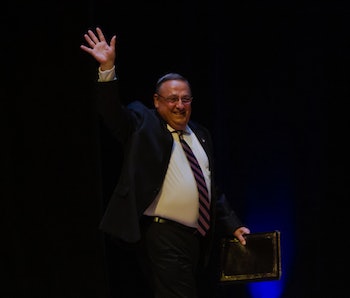 Writing your elected officials is said to be an act of civic duty, at least until said officials decide to take the time to personally write a brusque reply.

For 16-year-old Hope Osgood, a sophomore at Camden Hills Regional High School in Maine, voicing her concerns about about net neutrality was met with snark from her state’s governor.

Back in the fall, the teen wrote Maine Governor Paul LePage to express her dismay about the Federal Communications Commission’s potential ruling. The FCC ultimately did rule to end net neutrality at its December meeting.

The internet is the easiest way to access anything. News, information, etc. Companies being able to put restrictions on internet usage isn’t ideal! People will be left in the dark about some things. All my school work is internet based, but what happens if I can’t reach what I need to? What about my lessons in school?

Seemed innocent enough, but about a month later, Osgood got an unexpected reply from the state’s leader, which he had hand-written on her original letter.

“Hope. Pick up a book and read! Governor,” LePage had written. Yes, he apparently signs his name as “Governor.”

Understandably, Osgood called it a rude response to her concerns.

“I’m only 16 years old, I’ve only talked to so many people,” she told the Press Herald. “I just thought it was rude. I didn’t know how to react to that. I’m a kid. I can’t really do that much.”

Besides explaining that she and her classmates rely on the internet to complete research and assignments at school, Osgood fired back by describing the state of the books LePage told her to read.

“With books, there’s a certain limitation,” she said. “With the old books, I don’t want to say that’s wrong, but it’s not updated information. In my generation, we don’t pay attention to books. Our access is at our fingertips on our technology.”

Teens like Osgood aren’t alone in their dismay over net neutrality. In the past weeks, countless parties have come out in support of it and to urge the FCC to reconsider their decision.