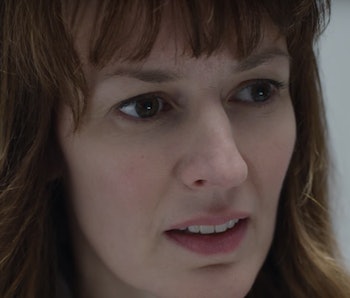 The first thing you learn when you become a parent is how to be afraid of the world again. This fact is central to “Arkangel”, the new Jodie Foster-directed episode of Black Mirror. Along with writer Charlie Brooker and producer Annabel Jones, Foster isn’t delicate with parents and critiques their protective fears through the lens of manipulative technology. This is Black Mirror 101: take a real problem — in this case, helicopter parenting — add a little bit of very near-future sci-fi, and zap, you’ve got a haunting cautionary tale. But, this attempt at tech-shaming doesn’t work. And that’s because the mother in this episode (Rosemarie Dewitt) makes questionable parenting decisions, even when you take away the crazy technology that ruins her and her daughter’s life.

The speculative tech in “Arkangel” is similar to the Black Mirror classic “The Entire History of You,” in which an implant digitally records everything the eyes see. The rub here is that this implant is used as a souped-up baby monitor. After nearly losing her toddler-aged daughter Sara on a playground, a mother named Marie decides to get an experimental implant called “Arkangel” which allows her to not only locate Sara with a subcutaneous GPS at all times but also literally see what Sara sees. This comes with a “content limitations” feature, allowing the mother to “paint out,” anything too upsetting. From violent imagery in movies to scary dogs on the sidewalk, Sara doesn’t have to be traumatized by anything ever again.

The thrust of “Arkangel” characterizes this level of overprotectiveness as essentially fatal to anyone’s normal development. Marie becomes obsessed with the gadget, well into Sara’s teen years. In probably the most damning move, she decides to track down Sara’s teenage lover, and threaten him in real life with a trite-and-true “stay away from my daughter” rant.

The problem here is the mother in “Arkangel” could have made all of these invasive decisions without the speculative technology. Today, it would be pretty easy for parents to cross these boundaries by closely monitoring a teen’s social media. But, in decades before that, nosey parents just read their kids’ diaries or became busybodies on the PTA. The point is, the bad parenting decisions in “Arkangel” aren’t really caused by technology. In one pivotal scene, when Sara is still really little, Marie is at work, and her grandfather is watching her. The audience is given several indications way before this scene that grandpa is not well, and that he could have a heart attack at any moment. When he does, Sara, of course, doesn’t react because the content filters on Arkangel are just showing her a big blurry blob, not anyone near death.

But why was the only caregiver for Sara a sick grandpa with a heart condition? We can hand-wave this plot point away by just saying that Sara’s mother is too poor for a babysitter, but still. The failure here was that a small child was being watched by someone in extremely poor health, not that there was a creepy Orwellian sci-fi gizmo installed in her brain.

Obviously, good science fiction about technology should be just as speculative as it is metaphoric. A better version of this story wouldn’t have turned Sara into a zombie-Borg automaton, but the hyperbole present in this story does weirdly suggest an opposite, and also bad, approach. Before he has his heart attack, granddad makes comments about simpler times when children were just sent out to roam free. Anyone who grew up as a latchkey kid knows what he’s talking about, which is just as irresponsible as too much supervision. Narrowly, the narrative of “Arkangel” can’t seem to settle on which one of these worldviews is correct and that’s because offering only these two extremes is a fallacy. In short, it’s perfectly normal and healthy want to protect children from some frightening aspects of life. But that doesn’t mean you go crazy about it.

In his book, Simplicity Parenting, Kim John Payne, M.ED. advocates the process of “filtering out the adult world,” with very young children. At the risk of reducing his viewpoints to one sentence, the idea is to be aware of how much stress you’re causing your children just by talking about stressful shit all the time. This doesn’t mean you become a weirdo who only wants unicorns and rainbows for your children either. Payne thinks you can filter out bad stuff for your children, but that becoming overprotective is obviously horrible, too. “When we overprotect, when we become so neurotic about the perfection of our children’s every experience and waking moment,” he writes. “We don’t protect them from sliding along the behavioral spectrum. We push them along it.”

Throughout “Arkangel,” Marie pushes her daughter into a state of mistrust and downright hatred. The episode closes with Sara hitchhiking after bludgeoning her mother with the Arkangel iPad-esque monitor. But the Arkangel tech was the scapegoat. The purpose of a baby monitor in real life is to periodically check on your kid’s breathing for your own peace of mind. And while it’s somewhat true that children must eventually learn that the world can be a scary place, parents are constantly learning and re-learning self-control. A skill that is particularly important a world populated by a hall of mirrors made up of screens.

More like this
Entertainment
Feb. 2, 2023
Everything Wrong with Netflix’s New Password-Sharing Rules
By Dais Johnston
Science
10 hours ago
The Weirdest Sci-Fi Apocalypse on Netflix Reveals a Controversial Field of Medicine
By Tara Yarlagadda
Science
Jan. 28, 2023
The best mystery thriller on Netflix ignores a basic fact about hydrogen energy
By Tara Yarlagadda
LEARN SOMETHING NEW EVERY DAY.
Related Tags
Share: