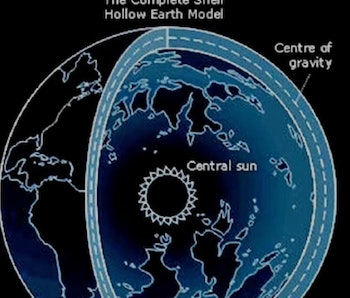 It seems some people have taken Journey to the Center of the Earth a little too seriously — or just haven’t read any other books besides it.

A pseudoscientific idea that Earth is actually hollow is rearing its ugly head again. It’s probably because The Sun decided to interview some dude who wrote an entire book about it, because of course they did.

“More and more people are coming to terms with the fact that the Earth is hollow,” Rodney Cluff, author of World Top Secret: Our Earth IS Hollow recently told The Sun. “I get emails from people learning about it every day. It’s definitely growing in popularity - certainly not in the millions but maybe in the thousands.”

It’s not worth understanding the intricacies of something this patently untrue, but here’s the gist: there are some people who think the Earth is round — or rather, doughnut shaped — and hollow in the center. What lies at the “center” of this Earth-doughnut seems up for debate — Cluff thinks UFOs and a “secret city of Eden” are hiding there, so do with that information what you will.

Clearly, we have overwhelming evidence that Earth is both round and composed of four internal layers. According to Hollow Earthers, though, images of Earth from space are NASA’s attempt to hide the truth, or something.

Hollow Earthers will be disappointed to know that what actually lies at earth’s center is a hot ball of iron, not aliens and demons or whatever. The next layer outward is called the outer core, then the mantle, then finally, Earth’s crust. While scientists can’t study the Earth’s layers by drilling out samples (except for the crust), they can study seismic waves from earthquakes.

Unless every scientist on Earth is in on NASA’s “plan,” Earth’s inner core definitely isn’t harboring any UFOs. Clearly, all the truly scary things are happening on Earth’s surface.

More like this
Culture
6.17.2022 6:00 PM
50 years ago, Watergate changed the American political thriller forever
By Steph Green
Science
4 hours ago
Cosmic rays could erase evidence of past life on Mars
By Kiona Smith
Entertainment
6.22.2022 11:00 AM
20 years ago, Disney's most chaotic sci-fi experiment ever paid off
By Rebecca Long
Share: