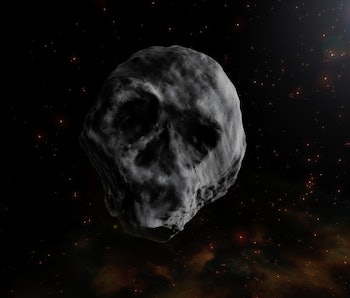 As I’ve said before, there’s nothing more both goth than space, and the universe constantly reminds us . On Halloween in 2015, a spooktacular asteroid called 2015 TB145 whizzed by Earth at a distance of 30,200 miles (486,000 km). Apparently, this freaky-looking space thing will be visiting us again next year.

The so-called “Halloween Asteroid” is only about 2,300 feet wide. Though astronomers first spotted it a few years ago, only recently did scientists at the National Science Foundation’s Arecibo Observatory in Puerto Rico notice the asteroid’s more chilling qualities. In certain lights, it resembles a human skull, which is astonishingly on-brand for a “Halloween asteroid.”

Researchers studying the asteroid published their new findings in the journal Astronomy & Astrophysics back in February.

“It is an Apollo-type near-Earth asteroid (NEA),” researcher Pablo Santos-Sanz from the Institute of Astrophysics of Andalusia (IAA-CSIC) said in a press release. “The proximity of this small object meant greater brightness, so we decided to study it using various observation techniques: on the one hand, we used optical telescopes from the Sierra Nevada Observatory in Granada, the Calar Alto Observatory in Almería and the La Hita Observatory in Toledo; and on the other, we analysed it in the mid-infrared using the Very Large Telescope (VLT) VISIR instrument at the European Southern Observatory (ESO) in Cerro Paranal, Chile”.

When the Halloween Asteroid makes its next pass near Earth, it’ll be even farther away than it was back in 2015 — this time, it’ll be about 105 lunar distances from us. And it won’t even be stopping by for Halloween — researchers say it’s expected to visit in November 2018.

“The next slightly more exciting encounter will be around Halloween’s day in the year 2088, when the object approaches Earth to a distance of about 20 lunar distances,” researcher Thomas G. Müller from the Max-Planck-Institut für extraterrestrische Physik, said in a statement. “The encounter on Halloween’s day 2015 was the closest approach of an object of that size since 2006, and the next known similar event is the passage of 137108 (1999 AN10) on August 7, 2027. Later, 99942 Apophis will follow on April 13, 2029 with an Earth passage at approximately 0.1 lunar distances.”

Scientists will continue to monitor this strange asteroid as it makes its way back to Earth. Clearly, this is no phony goth — and it’s NOT A PHASE, MOM.

More like this
Science
November 20, 2022
Scientists are looking into this last-minute strategy to save the planet from asteroid disaster
By Universe Today and Matt Williams
Science
November 21, 2022
Look: Orion just sent back these haunting views of Earth from space
By Jennifer Walter
Science
November 26, 2022
2023 meteor shower calendar: When to see the brightest shows of the year
By Jeff Nagle
Related Tags
Share: