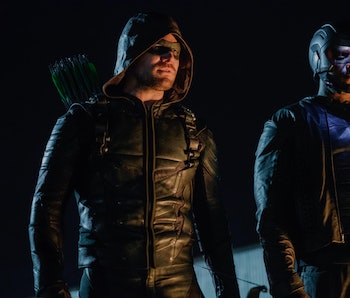 It’s not yet time to return to Star City, but that doesn’t mean we can’t stop thinking about Arrow.

It should be said that Season 6 is a different beast than previous seasons of Arrow. For most of the show’s lifespan, the winter finale has been an opportunity to dazzle the fans before leaving them at the edge of their seat. Historically, the winter finale has been a time for master plan reveals (Season 1), the fate of characters left unknown (Season 3, Season 4), or just plain shocking everyone with twists no one can explain (Season 5).

With Season 6, however, Arrow has tapped into an existential question: What is the point of all this? Dressing up in costume, fighting crime, all at the sacrifice of a healthy lifestyle? The disintegration of Team Arrow, a group of superheroes who have gone to hell and back just to bond together, signals that Arrow, much like The Last Jedi taking in 40 years of Star Wars franchise history, is re-examining itself without completely shattering the fourth wall.

It may not pack the same surprise punches as previous years, but the winter finale fans saw a few weeks ago was no less important.

While the DC CW series remains in hiatus, one can’t help but wonder what’s in store for the future of the series. What will happen when Arrow returns on January 18? We have some ideas.

1. Team Arrow Gets Back Together, with Thea Queen

This one is kind of expected. Basic storytelling requires that protagonists be at their lowest point before the third act, and from a certain perspective, every show’s third act are those episodes that finish off a season. Everyone split apart and hating each other is a pretty low “low point.”

Still, no team can stay apart forever. It’s kind of inevitable that Team Arrow will reunite as one force to fight Cayden James’s thus far unnamed alliance of bad guys, none of whom are super-villains, save for Black Siren. Yeah, they want to blow up the world or something, but unlike Ra’s Al Ghul or Deathstroke, Cayden is a pretty mid-tier threat. His villainy ain’t important, it’s whether or not Team Arrow can get their shit back together.

Get back together they just might. But could Thea Queen, who has recently woken up from a coma, return in fighting shape to become Speedy? In “Irreconcilable Differences,” Thea admitted that she’s not as strong as she used to be, but it can’t take much to whip her back into shape. That’s why the Arrow Cave is stocked like an industrialized Crunch Fitness. Depending on Willa Holland’s involvement in the series, which showrunner Marc Guggenheim says hasn’t changed since Season 5, perhaps Speedy will suit up again. If only for one or two more rounds.

It’s too much for Oliver Queen to be mayor. The walls are caving in, and it’s time for Mayor Queen to abdicate his position. Not just because it’s gotten a little boring, but because Arrow is running out of stakes for Oliver to lose.

The insanity of being a vigilante and a public official aside, “Mayor Queen” has exhausted pretty much all avenues the story could go. Of course, Arrow could have used the opportunity to explore real socio-political issues; police brutality, systemic racism, income inequality, women’s rights, the unfortunate rise in white nationalism—America, and indeed the world, could only benefit from a pissed-off, Woke Green Arrow on television would have been just as welcome as the Green Arrow in the comics was. Plus, a rich white asshole who inherited his fortune and fell into civic office is a very timely idea that Arrow didn’t make the most out of. With Oliver Queen under suspicion again, for what feels like the 200th time, it’s now the hour for Oliver Queen to resign.

3. William: The Next Arrow?

He’s barely a teenager, but William’s entire Season 6 arc — to have his father retire from being a superhero — only sets him up for the inevitable: William to become a vigilante archer himself. Bruce Wayne started training to become Batman at roughly the same age, so if William starts now, he’s on track to surpass his father by the time he’s 30.

Just imagine this final image: In the backyard of the old Queen residence, William takes up a bow and arrow, and gets a bullseye. No, he doesn’t need a mask or a costume, not yet. Just an acknowledgement that Oliver passed on his killer instincts to his son, though something of a Greek on its own, would be a hell of a way to close Season 6 and look forward to Season 7.

Arrow will return January 18 at 9 p.m. Eastern on The CW.