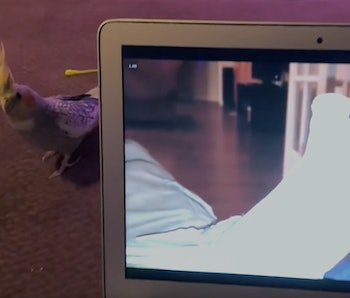 When Lucky sang to get his owner’s attention, he probably didn’t expect to go viral on the internet. The cockatiel’s perfect rendition of Apple’s default iPhone ringtone was an instant hit on social media. Apparently he’s not too pleased about it.

“Lucky became famous for singing a perfect rendition of an iPhone ringtone,” video recorder Ben Pluimer said in the upload description. “But watch what happens when he sees his own video! Dude is OVER it.”

In the original video, uploaded Wednesday, the cockatiel performs the “Opening” iPhone ringtone, included as the default tone on every device since iOS 7 launched in 2013. Whenever he gets upset, usually as the family starts tying their shoes to leave the house, he bursts into song.

The original video became an instant hit, with over a million views and nearly 90,000 upvotes on Reddit.

However, Lucky wasn’t too pleased by the attention. Watch the follow up video below:

“I love how he goes for the power cord at first, but changes his mind,” said Reddit user super_amazing. “Like, ‘That’s not good enough. He needs to suffer.’”

It doesn’t take long for Lucky to declare war on the laptop soon after the video starts playing. This behavior is relatively common with birds, with owners sharing several stories of their pets tucking into laptop keys.

“My keyboard looks like it has been to war and lost,” said ParrotDebate forum user Pajarita. “I have a number of keys missing so I type on the little knobby thingies that are under them and, sometimes, I have to hit the same ‘key’ several times to make it work.”

It’s not just cockatiels that like to steal keys. Instagram user booksandcorsets shared this image of their Senegal parrot having a chomp:

Lucky may have found internet fame, but it seems he feels the same way about laptop keyboards as many other birds.

More like this
Science
Jan. 29, 2023
Are coyotes dangerous to dogs and cats? Here’s how to keep your pets safe
By Tara Yarlagadda
Science
Feb. 1, 2023
Look! Five New Snake Species Discovered in a Habitat Devastated by Mining
By Robin Bea
Science
Jan. 29, 2023
Clean energy farms may endanger birds and bats — but the remains can reveal a solution
By Emma Foehringer Merchant and Undark
LEARN SOMETHING NEW EVERY DAY.
Related Tags
Share: