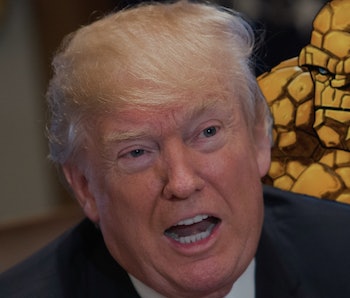 Donald Trump, the president of the United States in the real world, is also the commander-in-chief within the pages of Marvel comics. Typically, the person in the comics’ oval office is the same as the person in the real one, but Trump has yet to make an explicit appearance as the president in a Marvel comic. He’s a controversial figure, to say the least, so having him hang out with Captain America or Spider-Man would put Marvel in a tricky position. But, it turns out Marvel won’t even joke about Trump, as the publisher removed a line that originally made light fun of the president in a comic that came out on Wednesday.

A new comic, Marvel Two-in-One #1 from writer Chip Zdarsky, originally contained a pretty good goof making fun of Trump. In preview pages of the issue, originally obtained by Bleeding Cool back in November, Spider-Man alludes to Trump while joking with the Thing, of Fantastic Four fame.

But, in the final issue that hit shelves on December 2, the line is missing.

The line’s removal shouldn’t be a huge scandal, as it’s just a random, petty chuckle, but it is curious that someone at Marvel backtracked. When Inverse attempted to confirm if the thus-far absent Trump was actually the president in Marvel comics, the publisher was somewhat hesitant to answer, eventually offering up a tacit admission that, yes, Marvel’s got a President Trump.

With the line’s removal, the only allusion Marvel comics have made to Trump appears to be a reference to “a very nervous president” in April’s All-New Wolverine #19. There wasn’t even a hint of him in the big comic event that saw an evil, Nazi-like version of Captain America overthrow the U.S. Government, which is probably for the best.

But, if the “orange monster” joke is too risqué for Marvel, which has poked fun at past presidents in harsher ways before, maybe we really won’t ever see President Trump in the pages of a Marvel comic.

See Also: Is Donald Trump President in the Marvel Universe?