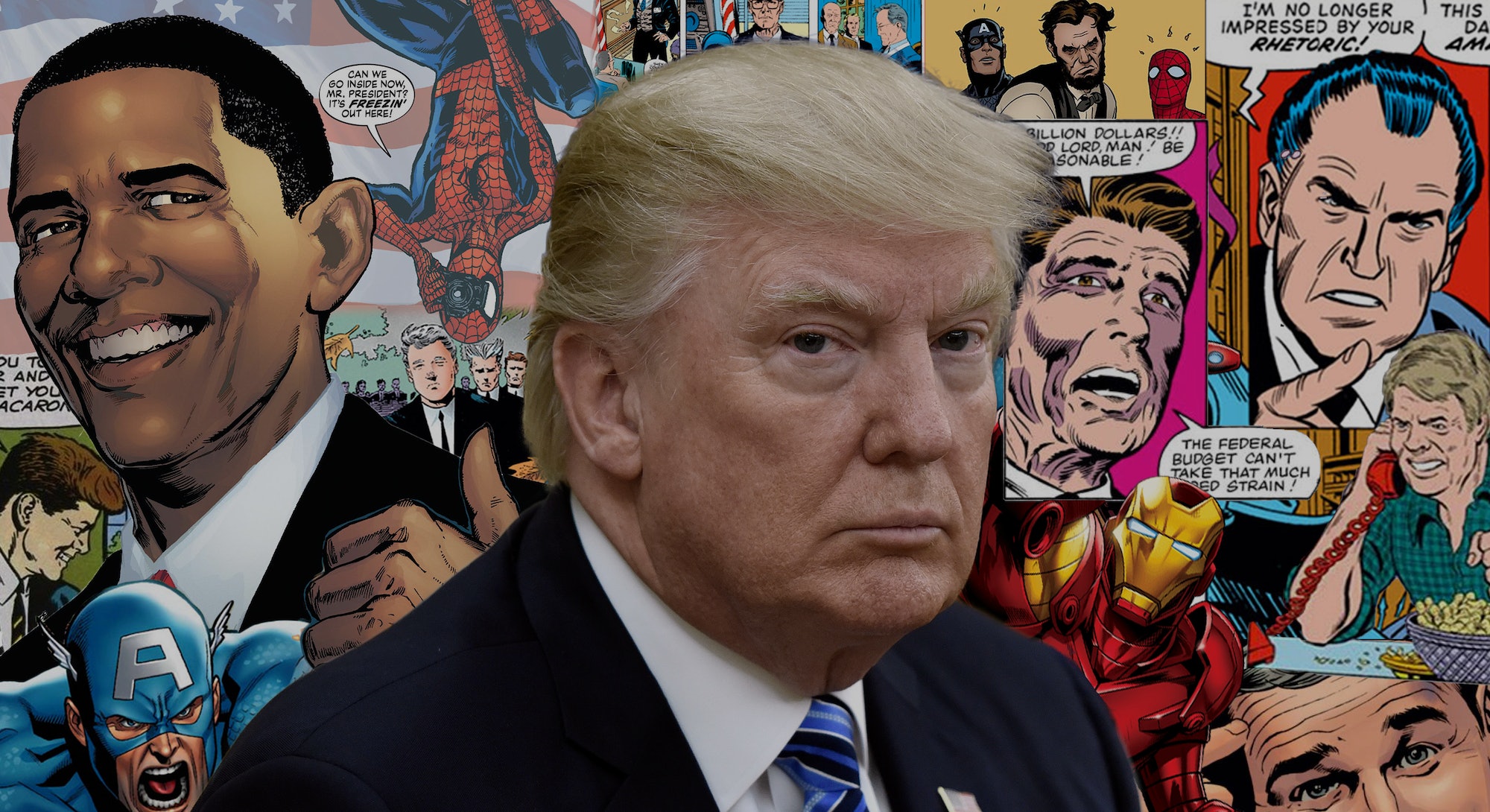 Iron Man and Captain America rush down the White House’s storied West Wing and throw open the door to the Oval Office. Galactus, the Devourer of Worlds, is headed to Earth, and the Avengers have a plan to stop him and save the day. They just need to inform the president in order to prepare for an epic superhero battle over the very fate of the planet.

Who are they about to talk to?

Marvel has always prided itself on being the slightly more true-to-life publisher between the Big Two. While DC Comics take place in fictional cities such as Metropolis and Gotham, Marvel tends to set its heroics in real locations, especially New York City. This is, of course, a gross oversimplification — there are tons of fake places in Marvel (e.g. Wakanda) and DC heroes visit real cities regularly — but it’s a good general rule. Marvel has always also been more consistent about making sure the real-life president is reflected in the comics.

In the early 2000s, DC ignored George W. Bush’s presidency, instead electing Lex Luthor and a couple other fictional politicians before eventually syncing up with real life and putting Barack Obama in the White House. A reboot of sorts, the New 52, undid this, and brought Dubya back into continuity. Trump hasn’t appeared in DC comics (save for an out-of-continuity cameo in Dark Knight III), but he’s assumed to be the president.

Marvel, meanwhile hasn’t deviated that much from reality when it comes to the president.

Thor saved JFK’s life in a 1963 comic, while Kennedy’s successor, Lyndon Johnson, saw through the Hulk’s angry exterior and realized he was just misunderstood four years later. Bill Clinton was a pallbearer at Captain America’s funeral (he wasn’t really dead), and George W. Bush heeded Iron Man’s council during the first superhero Civil War. Obama, famously, appeared on the cover of Amazing Spider-Man #583 giving a big ol’ thumbs up; it “sold over 350,000 copies, making it the best-selling regular series book in a decade,” the Wall Street Journal reported at the time.

Depicting the president is always a bit of a challenge — and Obama’s Spider-Man feature always read as more of an overt endorsement than typical presidential appearances. Usually, Marvel’s presidents are men who deserve (and receive) great respect. Pop culture often depicted George W. Bush as a dimwit, but in Marvel comics, he was wise and good. He made mistakes — maybe going along with Iron Man’s side in the Civil War wasn’t the right course of action — but he was trying to do the right thing. Richard Nixon, of all people, got a respectable depiction, even if there was a little bit of (mostly) good-natured ribbing involved. And, yeah, Ronald Regan turned into a mutant lizard monster in 1988, but it wasn’t his fault and he got better.

Trump has popped up in comics in various forms. A July 2016 issue of Spider-Gwen featured a supervillain who was clearly a grotesque parody of Trump, though that comic wasn’t part of the normal Marvel canon. But, the Donald has appeared, as himself, in a Marvel comic — it was just eight years before he became president. In The New Avengers #47, which came out in 2008, writer Brian Michael Bendis portrayed the then-businessman and reality TV star in a rather unflattering light. In the comic, Trump’s limousine blocks an ambulance, and a righteously annoyed Luke Cage lifts the limo out of the way.

“I will sue the—” Trump begins, emerging from the door.

“Get your ass back in the car!” Luke yells, and Trump sheepishly retreats. That same Trump is now, presumably, Luke Cage’s president. We just haven’t seen him yet.

There have been plenty of instances where the president could have appeared in Marvel comics since Trump’s inauguration. In April’s All-New Wolverine #19, S.H.I.E.L.D. director Nick Fury tells Wolverine that “a very nervous president” ordered him to scorch Roosevelt Island and the civilians on it to prevent the spread of an alien contagion. Trump isn’t explicitly named.

Marvel’s much-maligned summer event series Secret Empire, which saw an evil version of Captain America overthrow the United States government and take control of the world in the name of the evil, Nazi-aligned organization Hydra, didn’t feature the president. Granted, the groundwork for Secret Empire began well before Trump’s election, but it’s a little odd that the president HydraCap briefly overthrew didn’t appear before or after the coup. Perhaps that’s for the best though, since Secret Empire already was upsetting enough because Hydra are a bunch of fascist Nazi sympathizers. Seeing the real president, who enjoys very real support from white supremacists, retake the presidency at the end of the day might not exactly be the clear, happy ending Marvel was hoping for.

So, Trump hasn’t made an official appearance as president in the Marvel comics — and getting a straight answer out of Marvel about whether or not he was the president, and whether he’d ever appeared, wasn’t exactly easy. A Marvel representative originally gave Inverse a somewhat unclear answer about the company’s stance on who the president was, but another rep later provided a more concrete statement when asked to clarify:

“As always, the Marvel Universe reflects the world outside your window – with real places and real people,” a Marvel spokesperson tells Inverse. “While our stories do not focus on real-world personalities, political figures and celebrities live in the same world as our characters.”

That’s a tacit admission that, yes, Donald Trump is the president in Marvel comics, just like he is in the real world. And while Obama and, more recently, Canada’s Prime Minister Justin Trudeau had brief starring turns in single comic issues, Marvel’s correct in saying that its comics don’t typically focus on real-world politicians. But, real world leaders do make fairly regular cameo appearances, as we’ve seen — and President Trump hasn’t made one yet.

Will Trump ever make an appearance, and is there a reason why he hasn’t made one yet? Well, those questions are hard to get anyone with Marvel to commit to answering.

“Sorry. Not going near this one. :)” Spider-Man writer Dan Slott said when Inverse asked about Trump via Twitter DM. “It’s not pertinent to any story I’m telling. So why interject it into what I’m doing?”

Slott’s Twitter account is pretty clearly liberal-leaning, but it’s perhaps still understandable that he was hesitant to address Trump’s official place in Marvel Comics. Other Marvel writers that Inverse reached out to, including Bendis, haven’t responded. That the mere depiction of the sitting U.S. president in a comic book — which has been a tradition of sorts — is a controversial matter says something about Trump, a deeply polarizing president. A Marvel representative didn’t deny this fact when asked. Plenty of people hated Obama and Bush, yet they still graced the pages of Marvel.

Trump is so uniquely controversial, it would seem, that it’s better to work around the Oval Office rather than go into it. Show Trump with the same measured respect as previous presidents? Marvel’s normalizing him. Take a critical stance? Well, then somehow Marvel’s #FakeNews, even though it publishes fictional comic books.

It’s unclear how much of this might be trickling down to the company’s editorial wing, but Marvel Entertainment’s reclusive CEO Ike Perlmutter is a well-known Trump supporter. He donated $1 million to Trump’s campaign, and enjoyed a steak dinner with him in March. Explicitly putting Trump in the comics could be an internal third-rail, one that’s best avoided.

Or, maybe there’s another reason why Trump isn’t showing up in Marvel Comics: he just doesn’t fit in the story.

All previous presidents were depicted as serious, level-headed men who were respected by all superheroes — and in turn the president respected and heeded their sage wisdom when it came to supervillain issues. That doesn’t sound like Donald Trump. A meeting between Trump and Marvel heroes would end with him firing Nick Fury as S.H.I.E.L.D. director, insulting Captain America’s war record, starting an international incident with Wakanda after feeling slighted by Black Panther, and getting in a Twitter fight with Tony Stark. It’s hard to imagine putting Trump into a comic book without making the whole thing about him instead of superheroes, which isn’t Marvel’s usual M.O. Plus, if Marvel were to make it all about Trump, then of course it’s going to be a political nightmare in terms of optics.

Maybe we’ll never see Trump in the Oval Office in the pages of a Marvel comic, but we still have three years of his presidency to go, so there’s time. Marvel wouldn’t say that he’d never show up. How — and if — Marvel depicts him, though, will be interesting to see. At the very least, comic fans can hope to see Trump appear a couple decades from now, posthumously, if Marvel ever does an updated sequel to a recent Deadpool arc where he fought zombie U.S. presidents.