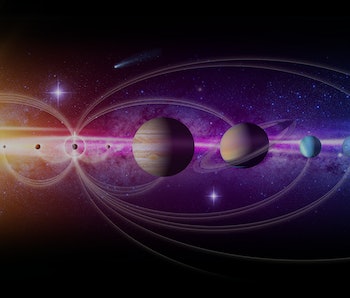 On Wednesday, NASA revealed the two finalists for its New Frontiers program which could have implications for actual scientists searching for extraterrestrial life (unlike whatever’s going on at the Pentagon).

Both will receive $4 million to work on their idea, and in 2019, NASA will choose one to build. The winning project could get up to $1 billion in funding from NASA and will launch sometime in the mid 2020s.

Why the Dragonfly Mission Could Be Big For Astrobiology

Between the two finalists, the Dragonfly mission could be particularly big for astrobiologists. NASA describes it as “a drone-like rotorcraft that would explore the prebiotic chemistry and habitability of dozens of sites on Saturn’s moon Titan,” which, yes, means it would be looking for signs of life. The lead investigator is Elizabeth Turtle from the Johns Hopkins University Applied Physics Laboratory (APL).

The plan is for Dragonfly to “hop” hundreds of kilometers from a particular spot on Titan, once a day every Titan day, which is equivalent to once every 16 Earth days. Hypothetically, Dragonfly would do this for about two years, taking various measurements along the moon’s surface.

“Titan is an ocean world, and the only moon in our Solar System with a dense atmosphere, which supports an Earth-like hydrological cycle of methane clouds, rain, and liquid flowing across the surface to fill lakes and seas,” the Dragonfly researchers wrote on their site about the mission. “The abundant complex organic material accessible on Titan’s surface makes it an ideal destination to study the conditions necessary for the habitability of an extraterrestrial environment and the kinds of chemical interactions that occurred before life developed on Earth.”

Some Hope For Enceladus

It’s also worth noting that one of the two concepts chosen to “receive technology development funds” is Enceladus Life Signatures and Habitability (ELSAH), which seems to focus on finding biosignatures on Saturn’s strangest moon. According to a press release from NASA, the mission seeks to “develop cost-effective techniques that limit spacecraft contamination and thereby enable life detection measurements on cost-capped missions.” As we know from NASA’s Cassini mission, Enceladus and its subterranean ocean seem to have all the right ingredients to harbor life.

No matter what these projects find, one thing’s for sure: They already have a better shot at finding signs of life than politicians.