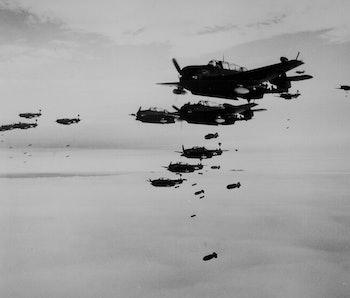 A mere 70 years after World War II ended, we’re still looking at 70 more years until Okinawa is cleared of unexploded bombs. About 2,050 tons of rusty ordinance remain, The Japan Times is reporting. If that’s true — unless you’re Ray Kurzweil and think the Singularity is near — pretty much all of us reading this will be dead before the last bomb goes harmlessly ka-boom.

“It’s scary to think I was sleeping above bombs,” Okinawa resident and master of understatement Tetsuo Shimanaka told the Times. Whenever workers find an old shell, people still have to evacuate their homes, thanks to relics dropped three generations ago.

Okinawa isn’t the only place where old, often-live explosives are a lasting reminder of long-dead wars. Mine pollution afflicts Colombia, Pakistan, and Afghanistan, where an estimated 10 million mines infest the ground. The good news, if you can call it such, is that casualties from land mines seem to be on the decline.

More like this
Innovation
18 hours ago
After quitting the ISS, Russia reveals its next-gen space station
By Darren Orf
Innovation
19 hours ago
Scientists finally found an efficient way to recycle plastic foam — it could make them rich
By Joanna Thompson
Innovation
8.15.2022 8:30 PM
This high-tech camera may help protect our identities — here's how it works
By Molly Glick
Share: