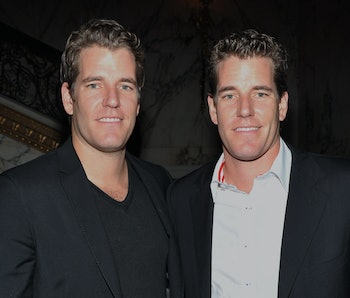 The Winklevoss twins are the world’s first bitcoin billionaires, but that doesn’t mean they’re about to cash out and make it rain. In fact, if Cameron and Tyler Winklevoss tried to convert their cryptocurrency into United States dollars, they’d probably crash the market and lose their fortune.

“Typical trading volumes across the major exchanges are only about $2 billion globally, so it would not be possible to convert $1 billion quickly [without] significantly depressing the market,” David Wells, general manager at bitcoin trading services firm itBit, tells Inverse.

The 36-year-old Winklevosses, immortalized in the movie The Social Network for their claim that Mark Zuckerberg stole their idea for Facebook, made headlines earlier this month for what bitcoin’s surging value meant for their purchase of $11 million in bitcoin four years ago. When the cryptocurrency reached $11,826, they became the first investors to get $1 billion returns. Since then, it’s crawled even higher to edge the $20,000 mark. Surely they’d want to take some of that out, right?

The twins would have two choices to cash out their billion. The first is to use any bitcoin exchange, where people buy and sell cryptocurrencies for other tokens or fiat currencies like the dollar. A buyer places a sell order on the exchange with their bitcoin deposits. Once the order is fulfilled, they can withdraw their fiat currency from the exchange.

However, in this scenario, we’re assuming the Winklevosses want as much of their bitcoin value as possible. Giant sell orders would cause the bidding price for buying bitcoin to decline.

“Although the cryptocurrency market has grown rapidly over the last few months, it is still a very illiquid market, particularly on the public exchanges,” Thomas Glucksmann, head of marketing at bitcoin token exchange Gatecoin, tells Inverse. “So, for those individuals looking to cash out larger amounts, they would need to use a service facilitating over-the-counter (OTC) transactions.”

With OTC trades, a buyer says how much they want to buy or sell, and the service tries to find a suitable match. A broker acts as the intermediary and negotiates a price, including the broker’s fee. Because these are big sums we’re talking about, the parties will probably use escrow services and law firms to make sure there’s trust on both sides. Depending on the parties and jurisdictions, they will need to comply with tax rules, know-your-client processes, and anti-money laundering requirements.

The trade is negotiated to take place at a specific time and date, ensuring the best possible market price. The funds are then released from escrow to the respective parties. Depending on how the markets are doing, OTC trades can result in discounts to the market price of around five percent or more.

For the Winklevosses, though, they’d probably have to do all this a few times over to get their money.

“[OTC] orders can be as large as $10-20 million; however, it would still likely take several weeks to sell $1 billion at a price that is close to the market price without taking a significant discount,” Wells says.

Given all that, it’s possible they decide the risk isn’t worth it and leave it alone. Still, at least the number looks big on the screen.