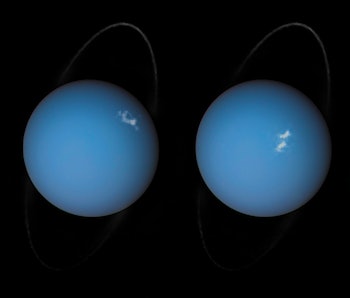 Uranus is primarily known for being the butt of everyone’s jokes. But the truth is, Uranus is pretty dark and mysterious — and apparently, pretty violent, too. At least it was in its youth.

A new study finds that a collision with large, foreign object did more than just tip a young Uranus on its side, causing it to spin 98 degrees off its orbital plane with the sun. Though the number of smash-ups between Uranus and various objects is widely debated, this new research is predicated on the idea that a single, Earth-sized object walloped the Ice Giant — and that the debris helped form 18 of the planet’s 27 known moons. The researchers presented their findings on December 13 at the annual meeting of the American Geophysical Union in New Orleans.

The team tested their idea with computer simulations, which found that the material left over from this collision could indeed form objects with similar orbits and masses to Uranus’s moons.

“Material from the two bodies is ejected in a debris disk, and finally satellites are formed from the debris disk,” one of the researchers, Yuya Ishizawa, told Space.com. “It is possible to explain the axial tilt and the formation of the regular satellites of Uranus simultaneously.”

The one thing that seems strange to the researchers is that their earlier simulations predicted several moons orbiting Uranus much closer than they do today. These moons eventually decayed over time and disappeared from Uranus’s orbit. According to Space.com, the team will take a closer look at what happened to these unusual moons.

While there’s so much we don’t understand about Uranus, one thing’s for sure — it’s a truly mesmerizing place, brimming with beauty and wonder.

More like this
Science
6.27.2022 8:15 PM
NASA mission to an ancient mini-planet in our Solar System suffers major setback
By Doris Elín Urrutia
Science
7.1.2022 1:00 PM
Why Jupiter Is One Of the Webb Telescope's First Targets
By Kiona Smith
Science
6.28.2022 10:15 AM
BepiColombo: Watch the probe’s second stunning Mercury flyby
By Jennifer Walter
Related Tags
Share: