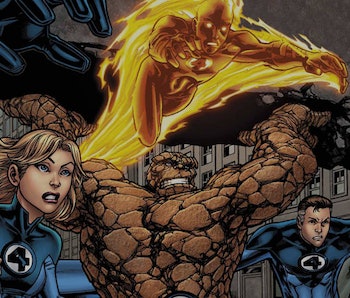 Disney has officially acquired 20th Century Fox, a landmark merger that worryingly makes the House of Mouse an even bigger pop culture monopoly. The good news, though, is that now all of Marvel’s superheroes are back under the same roof, as for decades Marvel Studios didn’t own the film rights to the X-Men and Fantastic Four. The official announcement on Thursday stated that both franchises were now under Disney’s ownership. For fans of a unified Marvel universe, it’s a relief to see the Fantastic Four listed among the properties, because there was actually some confusion about whether or not Disney actually would’ve acquired the rights to Marvel’s first family when it purchased Fox.

As a ScreenRant article noted before the merger was official, the trouble with the Fantastic Four is that Fox didn’t own the film rights to Mr. Fantastic, the Human Torch, Invisible Woman, and the Thing. They just licensed them from a production company you’ve probably never heard of.

Marvel fell on tough times in the ‘80s, filling for bankruptcy as the comic industry went into a tailspin. To help stay afloat, Marvel sold the film rights of their most popular characters to various studios, which is how Sony got Spider-Man and Fox got the X-Men in the first place. Since the Fantastic Four was Marvel’s first team, though, Stan Lee wanted to find the right buyer for them. Enter German producer Bernd Eichinger, who optioned the rights to a Fantastic Four and Silver Surfer film in 1986. He hadn’t bought the rights, but the deal was that he could keep them so long as he made a movie in the next seven years.

Predictably, Eichinger’s Constantin Films scrambled to make a Fantastic Four movie on the cheap side seven years later in an attempt to hold onto the rights. The 1994 Fantastic Four, which was created by the B-movie legend Roger Corman, was never officially released it was so bad. But it worked, and Eichinger still had the rights to the heroes for another seven years. As the next deadline approached, he went to Fox and partnered with them for the 2005 Fantastic Four starring Jessica Alba, Chris Evans, Michael Chiklis, and Julian McMahon (Marvel gave them an extension on the time limit so they could get the movie right).

Every Fantastic Four movie since has come from Fox, which distributes the films, but as far as anyone knew, Constantin Films still owned the production rights. That made the team’s return to Marvel via the Disney/Fox merger a less-than-sure thing, but Disney’s official press release about the acquisition suggests that they got things sorted out.

Hey, maybe we’ll get a good Fantastic Four movie out of all this?