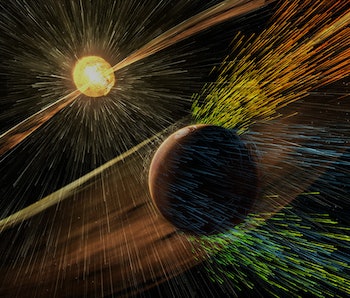 For as long as us Earthlings have been gazing into the sky, we’ve been obsessed with the potential for life outside of the planet we call home. Countless films have teased out where extraterrestrial life might be hiding, but all of those have been the creation of directors on a silver screen.

Now, thanks to the efforts of the NASA scientists behind the Mars Atmosphere and Volatile Evolution Mission (MAVEN), we might have a better idea of where aliens could be by using data collected from one of Earth’s planetary neighbors.

MAVEN doesn’t get the same kind of press as the Pluto-visiting New Horizons or the dearly departed Cassini, but its three years of work in orbit around Mars have provided invaluable data. This underrated space probe has helped reveal how Mars lost its initial carbon dioxide atmosphere around four billion years ago.that has been gathering information about Mars’s atmosphere since November 2014.

That atmospheric data has let the NASA scientists study whether other planets similar to Mars could sustain life if they were orbiting not at 1.5 times Earth’s distance from our sun but rather close in around a red dwarf, which would be much warmer. Their years of research will be presented at the American Geophysical Union Conference in New Orleans, Louisiana this week.

“Habitability is one of the biggest topics in astronomy, and these estimates demonstrate one way to leverage what we know about Mars and the Sun to help determine the factors that control whether planets in other systems might be suitable for life,” Bruce Jakosky, MAVEN’s principal investigator at the University of Colorado Boulder, said in a statement.

MAVEN has been keeping an eye on how the radiation from the sun has been whittling away at Mars’ atmosphere during its time in orbit. This gives the team insights on how quickly the ebbing and flowing radiation from stars degrades the atmosphere of rocky planets.

With this information in hand, the scientists ran simulations to see what kind of effects the energy from a red dwarf — the most common type of star in our galaxy — would have on Mars-like planets.

While the research possibilities presented by the MAVEN data are exciting, the findings of these simulations weren’t as much. Red dwarfs radiate some pretty potent ultraviolet rays, and that’s seriously bad news for life. Specifically, this simulated planet would get hit with five to ten times more UV radiation than Mars has been. These levels of radiation could blast the atmosphere off of this hypothetical planet way faster than the Sun did for Mars, making it not so safe for living.

Even though this experiment ended on a bit of a sad note, MAVEN has given scientists of ton of data that can be used on the hunt for alien life in the future.