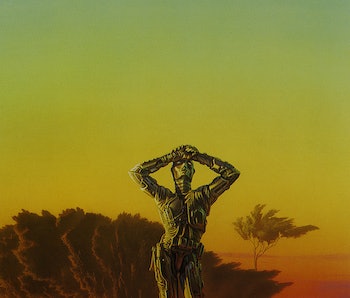 Artificial intelligence-powered robots are coming, and that’s okay. The Institute of Electrical and Electronics Engineers, the world’s largest technical professional organization, released on Tuesday the second draft of its “Ethically Aligned Design” guide. The guidelines are aimed at getting developers to think about their autonomous systems and question how they come together to benefit humanity.

“It is imperative that we create consensus about how these technology platforms may explicitly support and prioritize human values and well-being.” said Konstantinos Karachalios, managing director for IEEE Standards Association. “In doing so, we will overcome current sensationalism and fears associated therewith and we will be able to maximize the potential benefits autonomous and intelligent systems can bring for humanity.”

The document is the work of 13 expert committees from the “Global Initiative on Ethics of Autonomous and Intelligent Systems.” Each group looked at a different aspect of A.I. development to make recommendations. For this year’s document, the team added five new committees: wellbeing, mixed reality, policy, classical ethics and affective computing.

The teams needed to make recommendations about technologies even before they’ve reached maturity. Affective computing, for example, covers new developments like “robotic nudging” that encourage people to behave in socially just ways. The committee, headed by Ron Arkin and Joanna Bryson, had to consider cross-cultural interpretations of gestures like a robot looking away from a person, or engagement in small talk.

“We’re not issuing a formal code of ethics. No hard-coded rules are really possible,” Raja Chatila, chair of the initiative’s executive committee, told Inverse in an interview about last year’s document. “The final aim is to ensure every technologist is educated, trained, and empowered to prioritize ethical considerations in the design and development of autonomous and intelligent systems.”

There’s still more work to be done, though. The Global Initiative has released the document for public consumption, and it’s now asking for user feedback to shape future releases. The deadline to send comments is March 12, 2018.