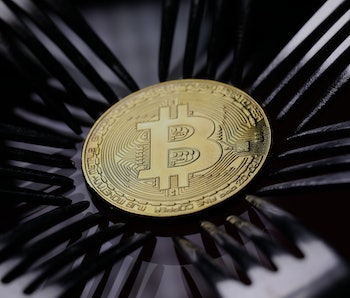 In the 1630s, the Dutch went absolutely wild for tulips. Demand for the flowers was so ridiculously high that prices rose astronomically, until a single bulb could cost as much as 10 times a person’s entire annual salary… until it all suddenly collapsed in 1637. The phenomenon has become known as tulip mania.

That’s the historical event the president of an investor protection organization saw as the best parallel for the current bitcoin craze during an appearance Monday on the CNBC show Power Lunch. He made the analogy while explaining what he saw as a fundamental uncertainty around the blockchain-based cryptocurrency.

“The problem is this: Innovation always outruns regulation, and right now there’s very little regulation in this entire area,” Joseph Borg, the head of the North American Securities Administrators Association, said on the show. “So we’re waiting to see what happens. Right now, this is sort of the mania phase of it, it’s kind of like tulip mania without the tulips right now.”

Borg described just how far people were willing to go to get in on bitcoin’s surging value, with some suggestion that people are being sold false promises even beyond whatever one may think of the cryptocurrency’s nearly constantly rising price.

“We’ve seen mortgages being taken out to buy bitcoin,” he said. “People borrow money. People do credit cards, equity lines. You know what I got this morning in an email, this morning before I showed up on the show? I got a guy who says to me guaranteed $13,000 profit, buy bitcoin right now in one day.”

Borg’s focus is on protecting the interests of more traditional investors, who he suggested are generally poor fits for bitcoin speculation.

“Anytime you have something brand new – Beanie Babies, I don’t care, pick one – it doesn’t mean there’s no real value here,” he said. “It means that perhaps the value is overinflated. From my point of view, and the folks I deal with, this is not something a guy who is making $100,000 a year, has a mortgage and two kids in college, ought to be investing in.”

He left unanswered who should be investing in bitcoin or any other cryptocurrency, though there are plenty of people who don’t fit that particular profile.

The cryptocurrency is what on Borg termed a “mania curve,” and he said at some point a leveling off has to happen. Despite that, though, he was reasonably optimistic that cryptocurrency in general wasn’t going anywhere.

“Look, cryptocurrency is here to stay,” he said. “Blockchain’s here to stay. Whether it’s bitcoin or not, I don’t know.”