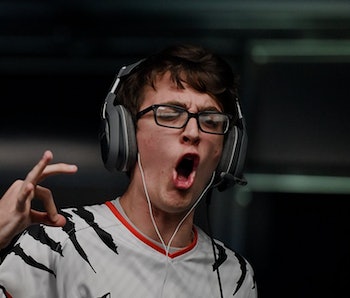 At only 25, James Clayton Eubanks is already a veteran in the pro gaming scene for Call of Duty, but you should call him by his gamer handle: “Clayster.” If you were to come up against him in-game, you probably wouldn’t stand a chance. He’s made at least $334,273 professionally eliminating enemies in Call of Duty.

Fresh off the release of Call of Duty: WWII in November, Clayster’s in Dallas for the Call of Duty World League (CWL) season opener to prove he’s still a contender. Inverse caught up with Clayster shortly after he helped clinch a Round 1 victory for his team, and the pro gamer revealed some of his secret methods for victory.

Like any pro athlete, diet is important, especially on game day. Clayster chalked it up to a combination of superstition and good dieting, but every morning before a competition, he consumes what he calls the “holy trinity”: banana, yogurt, and apple juice. That combo of nutrients seems to do the trick because he’s off to a great start so far leading team eUnited.

But that’s not the only secret to Clayster’s success. Like more than 90 percent of pro gamers, Clayster wields a Scuf Gaming controller during competition. These handcrafted controllers replace the default — sometimes with the same exact shape — but with added peripherals like rear bumpers, button reassignment, and even custom designs and grips. Clayster even has his own custom designs through Scuf. At least a week before every competition, he likes to get a new controller and break it in — like a professional ice skater breaking in a new pair of skates before competing.

Throughout his career, Clayster’s assumed the role of “Slayer,” which means that while his teammates focus on the objectives in most matches, his job is to lay down the gunfire and eliminate as many enemy players as possible. Slayers tend to be the sharpest players in the game with the most impressive reaction times. Hair triggers and more sensitive buttons on Scuf Controllers help with that.

Clayster went pro when he was still a teenager, and he ranked first in the 2015 Call of Duty world championships, which easily qualifies him as one of the best players in the world.

Here’s Clayster fresh off a victory in Dallas on Friday night:

Unfortunately, Friday night’s competition was marred by a bomb threat called into the Dallas convention center, which let to the even being shut down and the building evacuated.

But along with the rest of eUnited, Clayster has his head in the game:

Team eUnited is competing against more than 160 open bracket teams all weekend for a grand prize pool of $200,000.

If anyone can compete against Clayster and the rest of eUnited, it’ll be Optic Gaming, Luminosity Gaming, or Team Kaliber — but we’ve still got more than two days of competition to go.