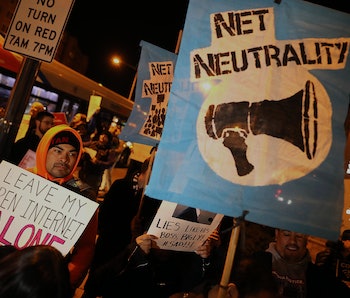 As Thursday’s nationwide protests made clear, the American public is not pleased with the Federal Communications Commission’s plan to vote next week on a plan that could hand unprecedented control of the internet to the big telecommunications companies. And as one member of the FCC said Friday, we can’t count on startups to disrupt our way out of this mess.

FCC Chairman Ajit Pai’s plan, which the five-member FCC is set to vote on next Thursday, calls for an effective end to net neutrality, the principle that internet service providers cannot play favorites with internet speeds or impede access to certain sites. Instead, Pai would simply require ISPs like Comcast, Verizon, and AT&T to be transparent with consumers about their practices.

Jessica Rosenworcel, one of two Democratic FCC Commissioners who disagree with Pai, told Recode’s Too Embarrassed to Ask podcast that transparency only has value if there are alternatives that consumers can turn to if they don’t like what their ISP is doing — and FCC datas shows more than half of U.S. households only have one provider that offers services in their area. And she doesn’t see the lifting of net neutrality rules as creating a boom in net neutral ISP startups, even when pressed to imagine the hypothetical positives of Pai’s plan.

“I think you’d have to bet on the idea that if you remove these rules there’d be a lot more investment, and somehow we’ll see more broadband in more places in this country that presently don’t have it, and that somehow new competitors will emerge out of the shadows…to provide service,” she said. “I don’t see those things as being likely or plausible, so I’m probably not the person to make this case, but I suspect that would be the one that they would make.”

While Rosenworcel didn’t elaborate on the reasons for her skepticism, a quick survey of the history of ISP startups — even those with the backing of a tech giant like Google — offers ample reason to be dubious. In a 2014 Ars Technica article, Jon Brodkin diagnoses many of the problems a would-be new ISP faces if it wants to offer fiberoptic internet, which has long been hailed as the next big innovation after broadband internet:

A new fiber provider needs a slew of government permits and construction crews to bring fiber to homes and businesses. It needs to buy Internet capacity from transit providers to connect customers to the rest of the Internet. It probably needs investors who are willing to wait years for a profit because the up-front capital costs are huge. If the new entrant can’t take a sizable chunk of customers away from the area’s incumbent Internet provider, it may never recover the initial costs. And if the newcomer is a real threat to the incumbent, it might need an army of lawyers to fend off frivolous lawsuits designed to put it out of business.

Many of those problems also apply to a wireless ISP startup. The infrastructure costs aren’t as great as they are for fiber, but with wireless it’s even harder to differentiate what they offer from incumbent ISPs, which are typically going to have far greater resources to put into protecting their territory.

ISP startups that have achieved some measure of success have generally done so by targeting communities that existing providers had left underserved or even outright ignored. Without diminishing the value of such work, those startups aren’t offering direct competition to the big ISPs, which Rosenworcel argues is the only way for Pai’s plan to have any logical backing in the event the transparency regulations show ISPs are being unfair to consumers.

“The challenge comes if you don’t like what’s going on, if they’re favoring some websites over others, blocking or censoring content, what do you do?,” she explained. “I mean ideally in a competitive market you pick up your service and you go elsewhere. But the great challenge for net neutrality right now is that according to FCC data, more than half the households in this country don’t have a choice of broadband provider. So transparency only serves you well if your marketplace is fully competitive, and if it’s not, you’re pretty much stuck with your current provider, and you’re going to have to deal with their traffic management policies.”

The counterargument that the Pai-controlled FCC has made is that the free market will sort this all out: If enough consumers are unhappy with ISPs that violate net neutrality, this will create an opening for ISPs that promise to be neutral. But since those ISPs don’t already exist, you have to believe that they would be able to get up and running quickly enough to meet this sudden consumer demand.

Even those bullish about the prospects of ISP startups — like, say, this article from FoundersClub published in May — see their potential in the fact that startup founders are in it for the long haul of 10- to 20-year builds, while the relatively short run of CEOs for big ISPs means they will prioritize short-term profits over long-term building of good relationships with consumers.

There doesn’t appear to be any shortcut for prospective ISP startups other than slow expansion building in areas that big providers have ignored. It says a lot that even Google has basically had to concede defeat with its plan to bring fiberoptic internet to hundreds of metropolitan areas, instead switching to a scaled-down wireless internet plan. If even Google can’t make headway competing with AT&T and Verizon, Rosenworcel is likely right to be skeptical that anyone else has a much better chance.

More like this
Gear
7 hours ago
How To Use Google’s New AI-Powered Visual Search
By Jackson Chen
Innovation
Jan. 25, 2023
Starship orbital flight: SpaceX successfully loaded the rocket with over 10 million pounds of propellant
By Mike Brown and Molly Glick
Innovation
Jan. 25, 2023
Watch: This jail-breaking wireless robot melts and reassembles on command
By Jennifer Walter
LEARN SOMETHING NEW EVERY DAY.
Related Tags
Share: