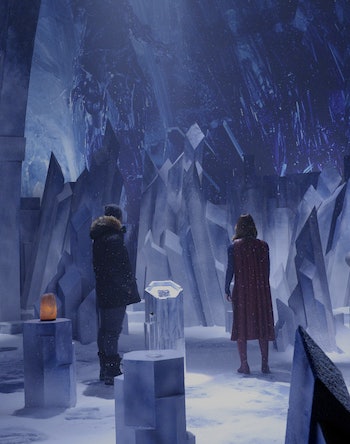 In the first season of The CW’s Supergirl, the evil Indigo scares Kara Zor-El (Melissa Benoist) enough that she retreats to the Fortress of Solitude for the first time. Basically, this is Superman’s version of the Batcave. In past versions of Superman, the Fortress, usually located in the Arctic and has been an integral part of DC canon for decades as a physical place for Superman to recharge mentally, emotionally, and sometimes, even to party.

In 1978, John Barry designed the iconic ice palace for Richard Donner’s modern masterpiece Superman. In 2015, it was on the shoulders of Seth Reed, a former architect turned production designer, to construct the Fortress for the Girl of Steel. He built other sets for Supergirl too, but elevator shafts and containment rooms ain’t the Fortress of Solitude.

It all began how everything begins in TV: planning, with a tight budget. “We looked at every representation of the Fortress of Solitude anybody had done, but we also knew that we were going to do our own on a limited budget,” Reed told Inverse in a recent phone interview. “We had access to really good resources, sculptors that could carve foam and make stalactite. We did the thing I love to do, which is partially practical, and partially virtual, do everything we can to make it as real as possible.”

Much of what makes the TV Fortress of Solitude look as good as it did visually was that Reed and his team made use of eye trickery with lighting. It was like stage magic, but for TV. “It feels like a gigantic stage,” Reed describes, “a vast huge stage that extends way down.”

“That was achieved with physical translight,” he says (and not a digital translight which is more common now). The light “hung around all three sides of the stage,” which allowed the directors to shoot “any camera angle and look right into it.” He boasts: “It’s very convincing.”

The devil was in the details. Even the fake snow had to look good, which Reed says was made of “special, non-toxic materials.”

“We carved the styrofoam, hard coated it, and we took these giant blocks of hard crystal behind them, and all across the ground and outer edges we built these snowy walls.”

The result was, well, the Fortress of Solitude as exactly as it should look and feel. Unfortunately, the reality of TV forced it to crumble. After the show’s first season, production on Supergirl relocated Los Angeles to Vancouver. While the Fortress has made return appearances in subsequent seasons, the first one introduced to fans no longer exists.

“‘Soon after we were finished with the show, period, we had to let the Fortress of Solitude go,” Reed says, a tinge of heartbreak in his voice. He explains in hypotheticals: “The way it works is that we try to figure out the sets. Let’s say the Fortress of Solitude was going to play in five episodes. They would give us warning, ‘You’re gonna hang onto this set, but after this episode you’ll be able to utilize the space this set occupies.’ So I wouldn’t be surprised if we got rid of that set before the show was over.”

“It’s heartbreaking because you put a lot of care into something and it’s all for the sake of capturing it on film,” he adds. “Once you’ve done that, it’s over.”

Reed has more than moved on, however. An established talent in the industry with credits in movies like Valkyrie, Real Steel, and TV shows like The Expanse on Syfy and Cosmos on Fox, Reed recently designed a brick-for-brick recreation of a Baghdad neighborhood for the modern period drama The Long Road Home on National Geographic, which began airing on November 7.

Dwarfing the Fortress of Solitude by square footage, the neighborhood set is recognized as one of the largest standing sets in North America. To build it, Reed and his team took over a portion of Fort Hood in Texas in order to recreate one harrowing chapter late in the Iraq War. The production team used a U.S. Army training village as a base, which the show’s crew expanded upon. It now continues its existence as a place soldiers live train for mission operations.

The Long Road Home “was a different animal” than the Fortress of Solitude, Reed says. It was “mostly exteriors and well over a 100 carpenters, painters, set dressers, and three sets of a mile of streets. 85 buildings.” The Fortress, meanwhile, was in a temperature-controlled soundstage somewhere on the Warner Bros. lot. Which also means neither James Olsen (Mechad Brooks) nor Supergirl were uncomfortably chill in the frost-blue Fortress.

“It was a colder time of year and it would be quite cold,” Reed recalls. “Once the lights turn on it’s a different story. A lot of stages use LEDs, not tungsten. They run a lot cooler. So that set, though it looked cold, it was not cold. Not too hot either. James is not suffering.”

Being asked to build the Fortress of Solitude, an important palace in popular culture, excited and intimidated Reed. But succeeding at the challenge prepared him to take on even more ambitious projects.

“You want to be inspired by what you’ve seen and maybe in some sense I can’t let anybody down, but then on the other hand, you know you’ve gotta just throw everything you have and not think about it too much,” he says. “From there we just build it.”