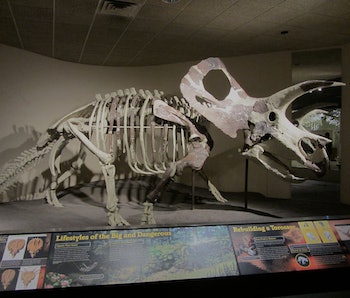 A construction crew working on a public safety facility in Thornton, Colorado, unexpectedly unearthed a skeleton in August, which they thought belonged to a Triceratops. Though this was in itself a big find, a closer examination by staff at the Denver Museum of Nature and Science recently revealed that the 66 million-year-old fossil was, in fact, a lot more interesting than it seemed. It turns out the skeleton belonged to a Torosaurus — a much rarer specimen.

“Not only is the fossil more complete and better preserved than I imagined, but it has also revealed itself to be something extremely rare,” Joe Sertich, curator of dinosaurs at the museum, told local station Fox 31 News on Tuesday.

When the fossil was first excavated, Sertich and the other scientists involved in the discovery were thrilled because the paleontologists didn’t usually find Triceratops specimens there.

“This is probably one of only three skulls of triceratops found along the Front Range area,” Sertich told Fox 31 News in August.

But careful examination revealed that the bones belonged to a Torosaurus, an animal that was pretty similar to a Triceratops but had a taller, thinner frill and, most noticeably, two large holes in the frill. Compared to Triceratops, a Torosaurus is a much less common find.

While an estimated 2,000 Triceratops specimens have been collected from the American West, only seven partial skulls of Torosaurus have been found. “The Thornton beast is by far the most complete, and best preserved, ever found,” said Sertich. It’s the most complete fossil from the Cretaceous period discovered in Colorado, retaining 95 percent of its skull and 20 percent of its skeleton.

Even during the summer, when they thought it was a Triceratops, paleontologists were excited about the find, as most ancient animal remains found in Colorado’s Front Range date from the last Ice Age, which occurred about 10,000 to 20,000 years ago. It was especially lucky that the construction crew left the fossil intact once they realized it was there; often, crews will dig right through fossil remains without even knowing they’re there.