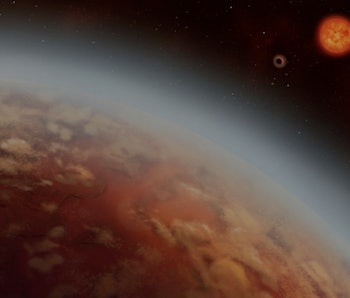 In the tireless search to validate our non-loneliness in the universe, a team of scientists think they’ve found another interesting place to investigate — a “Super-Earth” 111 light-years away our planet, called K2-18b. I mean, it was first discovered back in 2015, but now it’s really worth looking into.

Even better, the same researchers checking out K2-18b have discovered it has company — another Super-Earth.

Using data from the European Southern Observatory’s (ESO) High Accuracy Radial Velocity Planet Searcher (HARPS), researchers were able to learn more about K2-18b. The team carefully observed radial velocity data about K2-18b’s star, K2-18, in order to determine the planet’s mass. Radial velocity is predicated on the idea that stars are not stationary, and that instead, they’re influenced by the gravitational pull of planets around them. Thus, stars move a little bit, changing the star’s light spectrum.

“If you can get the mass and radius, you can measure the bulk density of the planet and that can tell you what the bulk of the planet is made of,” the study’s lead author Ryan Cloutier, of the University of Montreal, said in a statement.

After applying machine learning techniques, the team determined the planet is likely terrestrial with a gaseous atmosphere — a “scaled-up” version of Earth, hence its “super” nickname. Alternatively, it’s possible K2-18b is a watery planet covered in ice, but scientists won’t know for sure until instruments like the James Webb Space Telescope can take a look. For now, the team’s findings are set to appear in Astronomy & Astrophysics, but a pre-print is available on arXiv.

What’s exciting about K2-18b is that it’s located within the habitable zone around its star, which happens to be a red dwarf. This means K2-18b could hypothetically support liquid water and potentially, life. Its neighbor, the recently discovered K2-18c, might not be so lucky — the team found it’s a little too close to its star to be within the habitable zone. It’s probably scorching hot over there.

While none of us will be moving to K2-18b any time soon, at least it’s fun to add it to the List of Awesome Exoplanets. It’s not as cool as the TRAPPIST-1 planets, but certainly better than Proxima b.

More like this
Science
Sep. 12, 2022
A private mission wants to find alien life on the Solar System's most unrelenting planet
By Jeff Nagle
Science
Sep. 24, 2022
Super-Earths may be the best places to look for alien life
By Chris Impey and The Conversation
Science
Sep. 20, 2022
New study shows one of Saturn’s icy moons may be extremely habitable
By Kiona Smith
Related Tags
Share: