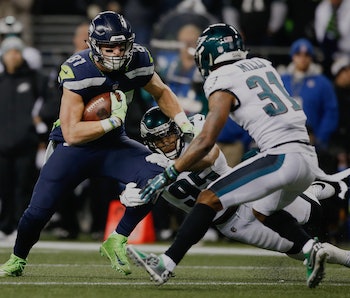 Neil deGrasse Tyson, noted Expert in All Things, graciously opened the doors of his immense knowledge vault to the world of professional sports on Tuesday as he weighed in on NFL drama between the Philadelphia Eagles and the Seattle Seahawks. On Sunday, Seahawks quarterback Russell Wilson threw a lateral pass to running back Mike Davis that moved forward but looked like it went backward, causing a huge controversy because it’s illegal for a player to throw forward after he’s crossed the scrimmage line.

Officials ruled that the pass went backward and was legal, though many, including Tyson, are contesting the call. In his argument, which he posted to Twitter on Tuesday afternoon with a video of the pass, he brought in a math reference to the obscure “Galilean transformation” to make his point.

Don’t feel bad if the explanation in his tweet wasn’t especially helpful to you. Galilean transformations, sometimes known as Newtonian transformations, are a very complicated set of equations that essentially dictate why a person’s frame of reference strongly influences the way they see things — direction of movement included. Their significance is not easy to explain, but Claes Johnson, a math blogger, does a fairly good job summarizing the function of the equations like this:

A Galilean transformation gives the connection between the coordinates in one system at rest and another system translating with constant velocity with respect that at rest.

To understand this in context of the Seahawks game, consider that there are multiple moving systems at play in the video, all moving relative to each other. In particular, we’re concerned with the movement of two main things: the movement of the ball from Wilson to Davis, and the movement of the players as they run forward. The illusion that the ball is moving backward is caused by the difference in speed between these two moving systems — our differing frames of reference. Because Wilson and Davis were running forward faster than the ball moved forward, the ball appeared to move backward.

If you were to plug in the right variables into the Galilean transformation equations, they would define the relationship between these two moving systems as they move relative to each other.

At the heart of the Galilean transformation, sometimes called the Newtonian transformation, is the idea that space and time are absolute — and what we conceive as length, duration, or mass are all constant, even if different people see them differently from different frames of reference. In other words, the only thing that changes isn’t what you see but how you see it — which, not surprisingly, can lead to some controversial football calls, together with pompous commentary from those with supposedly perfect vision.

If you liked this article, check out this video about metallic hydrogen, the holy grail of science.

More like this
Science
14 hours ago
AI Is Smarter Than Ever – But Some Problems Still Stump Today’s Computers
By The Conversation and Jie Wang
Science
9 hours ago
The Plague Is Still Here — And It Could Infect Your Cat
By Tara Yarlagadda
Science
8 hours ago
What Mysteries is the Universe Hiding from Us? A Cosmologist Weighs In
By M. Mitchell Waldrop and Knowable Magazine
LEARN SOMETHING NEW EVERY DAY.
Related Tags
Share: