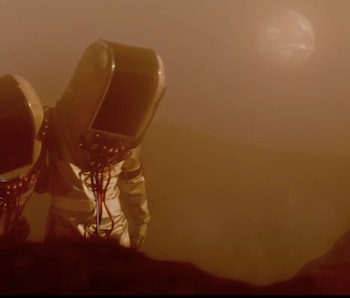 In what looks to be the most heartwarming nerdy movie of 2018, Dakota Fanning stars as a woman on a bold mission to get her Star Trek fan script hand-delivered to a contest before the clock runs out. And yes, there’s someone from real Star Trek in the movie, oh, and Patton Oswalt, too.

On Monday, Entertainment Weekly released the trailer for Please Stand By, in which Fanning plays Wendy, an autistic woman hell-bent on making her Star Trek fan script a reality. Alice Eve (who played Carol Marcus in Star Trek Into Darkness in 2013) co-stars as her sister and Oswalt plays a Los Angeles cop who knows how to speak Klingon. And the best part is, we’re probably going to get to see snippets of this invented fan script too. At one point Wendy tells another character that Spock goes to “Deep Space Nine,” proving her Trekkie cred runs deep.

This goes double for the filmmakers — Michael Golamco and Ben Lewin — who went to the trouble of recreating vintage original Star Trek spacesuits for the opening scene of the trailer. As Wendy narrates her script, in which Spock and Kirk appear to be stranded, we see two figures ambling over a very Discovery-esque desert planet sporting clunky old spacesuits.

And, these spacesuits are an exact match for the ones Spock and Kirk wore in “The Tholian Web,” a classic episode in which William Shatner’s famous acting style was muted, because he was a spacesuit ghost for nearly the entire story.

And, as mentioned, the shot on the desert planet was very reminiscent of Captain Philippa Georgiou and Michael Burnham in the opening episode of Star Trek: Discovery. So, with one shot, Please Stand By is referencing the original series and the most recent Star Trek simultaneously.

Set your phasers to bittersweet heartbreak on January 26, when Please Stand By hits theaters and video-on-demand.

Read Next: Rainn Wilson Tells Us Dwight from ‘The Office’ Would Love ‘Star Trek: Discovery’