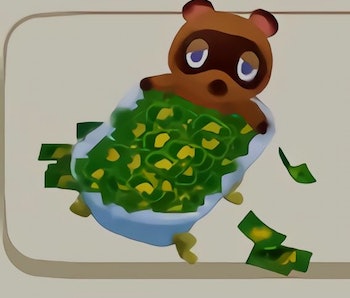 In just six days, 15 million people downloaded Animal Crossing: Pocket Camp, the latest addition to Nintendo’s adorable mobile dynasty. While the game is chock full of charm, beneath its cheerful veneer is the same character that’s been puppeteering it all since the beginning: the infamous Tom Nook.

At first glance, Tom Nook is a simple small-business-owner-slash-raccoon. He wears an argyle sweater vest and mumbles the end of his phrases sometimes. He has two large adult sons (or nephews?), Timmy and Tommy, who are twins — we think. But what you absolutely need to know about Tom Nook is that he wants his money. Now.

Pocket Camp has brought on an entirely new crop of Animal Crossing fans that might not be familiar with earlier iterations of Tom Nook, whose presence is less overt in the mobile version. To backtrack, in other Animal Crossing games, Nook cheerfully provides the player with an interest-free loan to get settled into town. It sounds great, except the player ends up indebted to — and working for — Tom Nook to help pay off the loan he gave them.

In Animal Crossing: New Leaf, the game amps up Nook’s robber baron persona by giving him a monopoly over the town’s real estate industry. When your player arrives in town, Nook is the only businessanimal who can sell you property. Conveniently, you can purchase items that’ll allow you to earn money (e.g. fishing rod, shovel) from Tom Nook’s family store, Nookling Junction.

Do you see how this works? Do you see who’s supposed to win?

“I think he’s so much more insidious than the average “capitalist shill” villain,” Animal Crossing fan Kendall tells Inverse. “There’s a lot of darkness behind that apron. Why does he have a uniform in my size the second I arrive in town? Was he following me? Did he know I had no money to my name and he routinely takes advantage of desperate poor transients?”

The questions go on an on — and as far as we know, remain unanswered.

Nook’s ruthless capitalist personality has earned him a reputation over the years, and it’s not entirely without good reason.

“Here’s my main beef with the raccoon,” Animal Crossing enthusiast Andy Phifer, who has dedicated a page of his website to Tom Nook’s nefarious deeds, tells Inverse. “Everyone in town is so nice, and the most wonderful part of moving to town is forming lasting friendships with the residents. But Tom is different. He only cares about bells and consumerism, a trait he passes to his bad sons.”

“[Tom Nook] only cares about expanding his kingdom and ensuring his awful sons, who accepted a huge gift from their father as startup for their business, have a gilded life,” Phifer adds. “He represents the worst parts of our world. He’s an infection. Tom Nook is the Donald Trump of Animal Crossing, and if it wasn’t for his delightful sweater vest and my commitment to goodness in that world, I would run him out of town.”

In Pocket Camp, Nook isn’t as present — but his influence is still palpable. It actually might be his most sophisticated scheme of all — for 250 leaf tickets, you can build Tom a chair so he can come visit your camp. Of course, you can spend some real-life leaf tickets — your money — in order to buy more of the game’s currency and build the chair faster.

So in effect, Tom Nook can take your actual human dollars, presumably to build himself a Scrooge McDuck tub like this:

Of course, not all Animal Crossing fans hate on Tom Nook. According to Dan Ryckert, Senior Content Producer at Giant Bomb, the thrifty raccoon is simply misunderstood.

“I don’t think Tom Nook was ever nefarious,” Ryckert tells Inverse. “He welcomes you — a total stranger that just stepped off a bus in his town— with a plot of land and a house. Then he offers you a job and an interest-free loan with absolutely no due date. Tom Nook is a great man.”

Despite all this, Nook might not be for everyone.

“His personality may come off as a little cold and humorless compared to the music-enthusiast penguins and citrus-headed cats around town, but he has a kind and charitable soul,” Ryckert says.

It’s hard for Animal Crossing players not to feel something about Tom Nook. While his antics have been mostly harmless — even endearing at times — perhaps this the sneaky raccoon has gone too far. For once, it might be Tom Nook’s time to pay.

More like this
Gaming
Jan. 26, 2023
Hi-Fi Rush reveals a surprising strength of Xbox Game Pass
By Willa Rowe
Gaming
Jan. 25, 2023
Fire Emblem Engage needs to let its characters out of the closet
By Robin Bea
Gaming
Jan. 19, 2023
Eight major trends that will shape the games industry in 2023
By Robin Bea
LEARN SOMETHING NEW EVERY DAY.
Share: