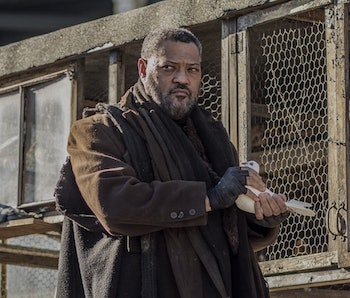 In the seminal film John Wick: Chapter 2, Laurence Fishburne plays the Bowery King, an operative who runs a clandestine pigeon network under the cover of abject poverty. His birds work behind the scenes to deliver messages and small objects off the grid to help keep his assassins’ activities underground. The Wickverse, of course, is speculative fantasy, but scientists won’t deny the fact that such a pigeon network is plausible. A Current Biology paper, published Monday, explains why.

In the paper, researchers at the University of Iowa argue that pigeons really do have remarkable cognitive abilities, much more similar to those found in humans and non-human mammals than the “bird brain” stereotype suggests. While pigeons have delivered human messages since the days of ancient Roman chariot races, it’s only now that scientists understand how they do it. In the paper, the researchers report that pigeons, like us, can simultaneously process time and space, making it possible for them to perceive larger stimuli as longer-lasting than smaller stimuli. In other words, they seem to understand what it means for a target to be far away or close by.

Benjamin De Corte, a grad student at the University of Iowa and first author on the paper, explains to Inverse that carrier pigeons are much like predators chasing their prey.

“To intercept appropriately, it needs to be able to judge how fast the prey is moving and use that to predict where it will be in the near future,” he says.

“For pigeon navigation, the same sort of calculation needs to be made.”

Pigeons, it seems, can navigate toward a target location in the complete absence of any visual landmarks that it could use for guidance. “To do that, they need to be able to generate an internal sense of how far away they are from their target. To accomplish this, it can track how fast it’s moving on a moment to moment basis and in what direction,” he explains.

To investigate what allows pigeons to perform these tasks simultaneously, De Corte and his team studied how the birds integrate space and time. The pigeons were trained to judge a horizontal line based on either its length or the amount of time it was shown. Birds that correctly chose the length or duration of the line from the possible options by pecking at it received a food-based reward. At the end of the experiment, it was clear that birds could judge longer lines as having longer durations and lines with longer durations as being longer, reinforcing the idea that pigeons process time and size as a single magnitude.

Mammals do the same thing, and previous research has established that time-space processing takes place in the brain’s cortex. But here’s the thing: a pigeon’s brain doesn’t have a cortex, making it all the more surprising that they exhibit this behavior.

One possibility is that the previous theory is wrong, and the system is not dependent on having a cortex. “The striatum is shared between birds and mammals, and integrates diverse information, such as time and goal-directed behavior. Perhaps this structure also integrates time, space, and number,” the paper’s authors write. “However, considerable causal evidence already shows that the parietal cortex mediates time, space, and number judgments.”

Another possibility is that part of a bird’s brain is analogous to the human cortex, though there’s not much evidence for this.

The most probably explanation, the researcher write, is that pigeons evolved this ability alongside mammals but in a way that was also completely independent. Convergent evolution, in which different selection pressures make different species develop a common trait, has forced pigeons to develop the “common magnitude” system. This would explain why, despite the fact that the pigeon doesn’t have a cortex in its brain, it’s can perform well at tasks that are considered cortically dependent.

Whatever the seat of their exceptional spatial reasoning skills, the fact remains: Pigeons are great navigators, and this is probably due to their ability to process abstract concepts of space and time. So, next time you see a pigeon, possibly with a lil backpack on, maybe give it a break for eating trash and consider that it might be on its way to deliver a message for a vast underground network of assassins like John Wick.

Check out these Gun Fu movies if you liked John Wick: Chapter 2.