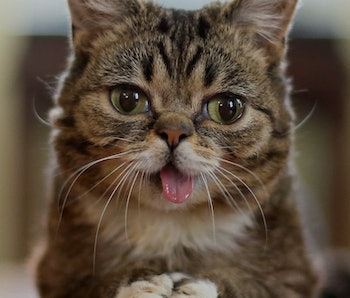 You now have an excuse to spend hours watching cat videos online. A new study at the Indiana University Media School published in the journal Computers in Human Behavior shows that viewing these videos can actually boost energy, increase positive emotions, and reduce negative feelings. Anyone who’s ever spent their morning watching “Maru’s Greatest Hits Vol. 1” instead of working is familiar with the nagging guilt that comes with it, but this study shows that the positive emotional pay-off may actually help you tackle difficult tasks afterward.

Cat videos hardly seem like a topic worthy of academic study, but nobody can deny how much they’ve become a part of our heavily Internet-based culture. “If we want to better understand the effects the Internet may have on us as individuals and on society,” said assistant professor Jessica Gail Myrick, who led the study, “then researchers can’t ignore Internet cats anymore.”

If you’re not convinced, just take a look at the numbers: in 2014, there were over 2 million cat videos posted to YouTube, and together they had almost 26 billion views. Cat videos also have the most views per video than in any other content category (the original, 16-second Surprised Kitty video has over 75 million views). That’s a lot of time spent watching these videos. But was it wasted time?

That’s what Myrick hoped to find out. In her study, she surveyed almost 7,000 people via social media about their cat video viewing habits and the way they affected their moods, aiming to investigate whether watching cat videos might have similar effects to pet therapy and whether the guilt associated with procrastination actually made viewers feel worse.

She found that participants felt more energetic and positive after watching the cat videos — which, notably, they mostly did at work or while studying — and the pleasure they got while watching outweighed any feelings of guilt. They also reported feeling less annoyed, anxious, or sad after watching these videos.

In addition to supplying you with excuses to give you boss today, this study could lead to the development of video-based, low-cost pet therapy, which may also improve your mood and overall health. So the next time you’re stressed at the office, go on and indulge in that Lil Bub video — your co-workers will thank you for it later.