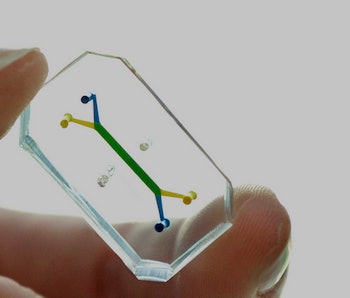 Animal testing ruffles a lot of feathers, but when it comes to advancing science, it’s often the necessary alternative to using ourselves as guinea pigs. But researchers at Harvard’s Wyss Institute have developed a way to avoid it altogether: “Human Organs-on-Chips” are microchips lined with human cells that model human organ tissue way better than any animal can. If it’s adopted by scientists — and it might happen sooner than we think —it could eventually end animal testing forever.

The technology, which belongs to Emulate, Inc. and was developed by Donald Ingber and Dan Dongeun Huh at the Wyss Institute, promises to offer “greater precision and control than today’s cell-culture or animal-based testing approaches.” The chips have just won the London Design Museum’s Design of the Year award for its simplicity and “pioneering application”.

Essentially, what the chips do is mimic the inner workings of a human organ on a tiny scale. The researchers developed this by recreating an organ’s key components — the extracellular matrix (the stuff around your cells), the tissue-tissue interface, immune cells, blood components, and other biochemical factors — using real human cells that line the channels within the chip.

The final product is a microchip that can model a variety of healthy human organs and, importantly, one that can be manipulated to recreate a disease state. This is where it becomes crucial to scientific testing. Emulate, Inc. reports that they’ve already used “Lung-on-Chip” to study a drug used for pulmonary edema and manipulated it to mimic a lung with asthma-associated inflammation. They’ve also successfully made “Gut-on-Chip”, in which the cells expand and contract, just like a human intestine.

This could become the technology needed that eventually replaces animal testing, but before that happens, Emulate Inc. will have to prove that its chips are better modeling systems than animals. This will take some time, but it’s already underway: Astrazeneca has teamed up with Emulate to make organs-on-chips using animal cells so they can better compare the two. A big roadblock for the chips will be convincing the FDA that they provide conclusive enough evidence to move drugs from preclinical to clinical trials. In the meantime, Emulate has just announced plans to work together with pharmaceutical powerhouse Janssen to study the chips’ usefulness in testing drugs for pulmonary thrombosis and liver toxcity.

More like this
Innovation
Jan. 16, 2023
3D-printed “organs” could lead to better drugs
By The Conversation and Chengpeng Chen
Science
Jan. 25, 2023
Look: Primate relative shows how ancient animals adapted to global warming
By Jennifer Walter
Science
Jan. 24, 2023
Look: With a mouth full of teeth, this Pterosaur ate like a whale
By Jennifer Walter
LEARN SOMETHING NEW EVERY DAY.
Related Tags
Share: